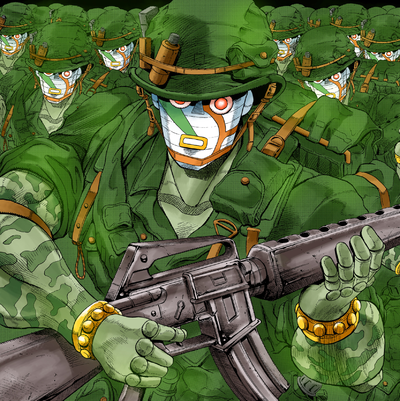 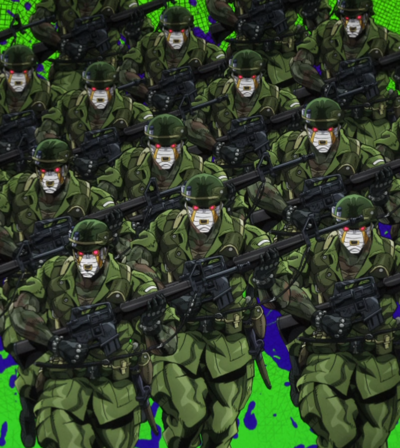 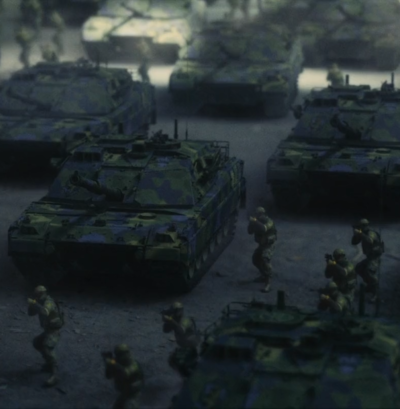 Bad Company (, Baddo Kanpanī) is the Stand of Keicho Nijimura, featured in the fourth part of the JoJo's Bizarre Adventure series, Diamond is Unbreakable.

Instead of a single entity, Bad Company manifests as a whole army of miniature soldiers and military vehicles, with all the firepower it implies. They serve Keicho without question but are shown talking to one another and making very careful maneuvers. 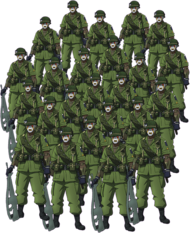 Bad Company appears as a group of 60 Patchwork soldiers, an uncertain amount of Green Berets (most likely part of the 60 soldiers), four helicopters modeled after the Boeing AH-64 Apache, and seven tanks modeled after the M1 Abrams,[2] all armed to the teeth and dressed similar to American G.I.s. Much like the figures they are based on,[3] all the units in Bad Company are scaled down to size and resemble something like sentient toys.

In the live action film, Araki drew the camouflage pattern on their suits. The pattern repeatedly has the word "TRILLION" written in English in a mix of khaki and purple.[4]

The series is known for alternating colors between media, the information presented below may or may not be canon.
Clothes
(Chalet Green and Paarl for the jacket and belts, Mustard for the arm bands, and Limed Ash for the helmet accessories.)
Skin
(Swamp Green for base color and Dingley for camouflage)
Head
(Spring Wood head, Burnt Sienna for Iris, Shuttle Gray for the nose, and Fern and Jaffa for the markings.)
Rifle(Hurricane)
Clothes
(Chalet Green and Green Smoke for the jacket and belts, Tom Thumb for the helmet and pockets, Ebony Clay and Mystic for the helmet accessories and gloves, and Outer Space for the boots)
Skin
(Soya Bean for base color and Limed Ash and Avocado for the left and right arm markings)
Head
(Athens Gray head, Amaranth for Eyes, Storm Gray for the nose, and Anzac for the markings.)
Rifle(Feldgrau)

Bad Company is the first colony-type Stand to be featured in the series and as such, it is composed of many weaker individual units whose power can add up when combined. Damage to one individual is not transferred to the User, though it is unknown if killing all the soldiers, helicopters, and tanks would kill Keicho too.

Bad Company is a small, yet imposing force in combat as it's capable of deploying a great amount of firepower, while also using subtle military tactics. Commanded by the meticulous Keicho, who uses the confined space of his house to trap Josuke, Bad Company proves to be highly dangerous.

Bad Company is a group of hand-held soldiers and war vehicles and is equipped as such.

Keicho orders Bad Company to fire at will

Each of Bad Company's soldiers is armed with an M16 assault rifle, parachute, and combat knife.[5] The Green Berets have the same equipment as the soldiers, but with the addition of a rappelling rope which allows them to climb objects.[6] The helicopters are armed with machine guns and missiles,[5] and the tanks have scaled-down shells.[5] In addition, Bad Company is also equipped with land mines.[7]

Despite their reduced size relative to an actual army, the weapons of Bad Company are still dangerous. The infantry's miniature M16s are able to puncture through human skin, creating small but deep bullet holes;[5] a land mine's blast is enough to severely wound a leg and a pair of missiles from one of the helicopters was enough to disable Crazy Diamond's arm.[7]

Bad Company is most effective when all of its units fire at once. Defensively speaking, the disciplined fire of the infantry, which Keicho describes as a "wall of steel," can shoot down any projectile as long as they have the time to see it coming. Offensively, the combined fire of the infantry and all the vehicles creates an onslaught of projectiles able to blast away a wall.[6] However, this method commits all units to offense and leaves Keicho defenseless to attacks. Thus, the army was not able to shoot down a missile Josuke sent back to Keicho as they were focused on firing on the former.[7]

In the live action adaptation of Diamond is Unbreakable, Bad Company is given another caveat in its ability. When Keicho gives Bad Company a command, the army will only work towards carrying out that specific command, and it cannot be changed once ordered.