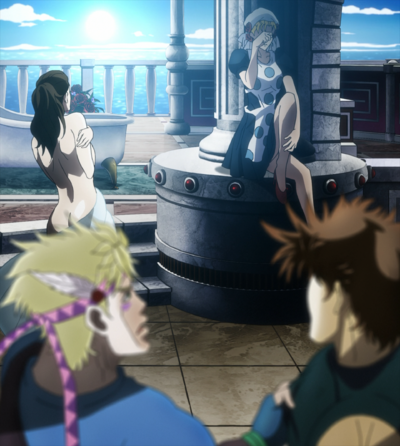 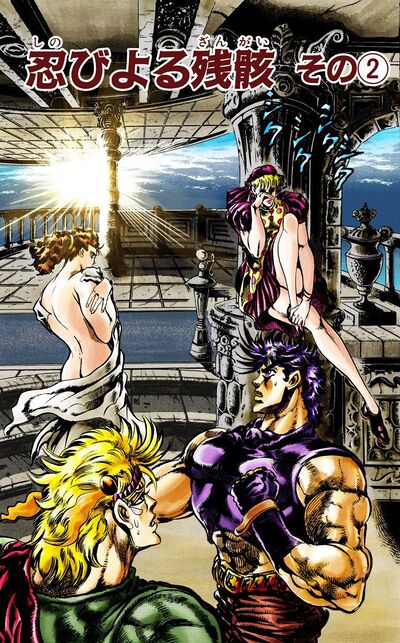 It narrates the aftermath of the battle between Joseph and Esidisi: although the Pillar Man is reduced to a brain and his nerves, he infiltrates Lisa Lisa's island and steals the Red Stone of Aja. 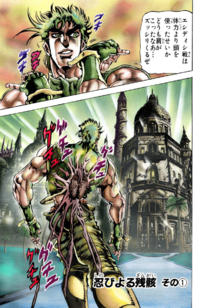 Joseph returning to Lisa Lisa's villa, unaware of Esidisi's remains on his back

Believing Esidisi to have been defeated for good and having removed the Wedding Ring of Death in his windpipe, Joseph returns to Lisa Lisa's villa. However, Esidisi has survived as a disembodied brain and nervous system that has latched itself on Joseph's back without his knowledge, the Ripple warrior only feeling a vague back pain. In her room, Lisa Lisa observes the dawn and feels uneasy. She tells her maid Suzi Q to summon Joseph and Caesar to her room once they arrive and takes a bath in the meantime. Suzi Q crosses path with Joseph, at first not recognizing him without his breathing mask. The two flirt with each other before Suzi Q relays Lisa Lisa's words to Joseph, who no longer feels the mild discomfort in his back after the two part ways.

Joseph goes upstairs, looking out the window to see Suzi Q handing off a package to a mail boat at the docks. As Suzi Q has told him that Lisa Lisa is taking a bath, Joseph decides to peep on his teacher bathing through the keyhole. His enjoyment is cut short when he notices that Suzi Q is now besides Lisa Lisa despite having been at the docks moments before. It is revealed that Suzi Q is now possessed by Esidisi and had stolen the Red Stone of Aja. Esidisi, speaking through the maid, reveals that he's mailed the Super Aja to his companions and intends to keep the Ripple users where they are by holding Suzi Q hostage.[1]

Caesar returns and sees Lisa Lisa, Joseph and Suzi Q in the same room. Joseph explains the situation, and now all three Ripple users are trapped in the room with Esidisi blocking the way out, claiming that they must kill him with an amount of Ripple that is also fatal to the maid to get past him. Joseph tries to bluff Esidisi into leaving Suzi Q's body with a fake Ripple attack, but the Pillar Man doesn't even flinch. Esidisi decides to overheat Suzi Q’s body so she will explode, planning to kill the Ripple users with the resulting splatter of boiling blood. Luckily, Joseph remembers that two Ripple can cancel each other. He and Caesar work together to send the Ripple into Suzi Q's head, feet and back, the two surge of energy canceling each other at Suzi Q's heart, sparing her. Forced out, Esidisi latches on Joseph one last time before his remains are dissolved from exposure to sunlight. While Caesar calls Esidisi a coward for using Suzi Q, Joseph admits his respect for the Pillar Man as he was willing to do anything for the sake of his comrades.[2]