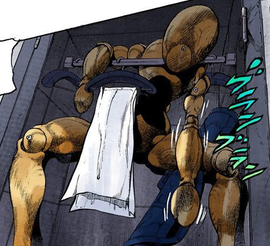 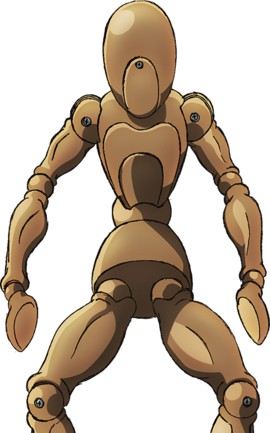 Destructive Power
B
Speed
B
Range
C
Stamina
B
Precision
C
Developmental Potential
C
A
B
C
D
E
A: Very Good
B: Good
C: Average
D: Poor
E: Very Poor
“
Once I've become your copy, you have to pose the same way that I do. In short I'm a doll that "manipulates"!
”
—Surface, Chapter 290

Surface (サーフィス（うわっ面）, Sāfisu) is the Stand of Toshikazu Hazamada, featured in the fourth part of the JoJo's Bizarre Adventure series, Diamond is Unbreakable. It is bound to a wooden mannequin and can copy someone's appearance. Moreover, if Surface and the person they copy make eye contact, Surface forces its victim to copy the movements it performs.

Surface appears as a human-sized mannequin, with several screws sticking out of its head. While in action, Surface takes on the appearance of another person - matching voice, mannerisms, and clothing - save for the screw on the forehead.

It has no personality until its abilities are used, upon which it adopts the personality of whomever it is copying at the moment. While acting as a doppelganger of Josuke, it even made fun of its user, Toshikazu, for hitting him and hurting his hand on its wooden body; it was also smug towards Toshikazu because he was more popular with girls. However, he was still willing to serve his master without question.

Befitting its wooden nature, Surface is generally portrayed as light brown in most media.

Although physically underwhelming, the only noteworthy characteristic being its speed,[2] Surface is a menacing Stand because of its two powers of mimicry and control over people. Unfortunately, it is held back by Hazamada's pitiful handling and his impulsive personality.

Surface's primary ability is to copy the appearance of another person.[2]

If the mannequin faces someone, it will perfectly copy that person's appearance, voice, and mannerisms, down to the fingerprints, as noted by Josuke.[3] However, a screw on Surface's forehead enables people to tell them apart. As a Stand bound to a mannequin, no damage done to Surface will be reflected in Hazamada.

Surface still remains a wooden mannequin on the inside, causing Hazamada to hurt himself while punching his Stand.[4] If a piece of the mannequin is cut off, that area will return to its wooden state.[4]

When Surface impersonates someone, it can force that person to imitate its movements.[2] This prevented Josuke from hitting it by standing still, making it impossible for him to move and strike it - even with his own Stand due to its limited attack range. However, Surface must stand in front of its victim for it to work.[2]