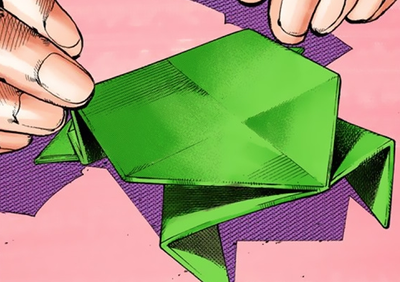 Paper Moon King (ペーパー・ムーン・キング, Pēpā Mūn Kingu) is the Stand of Tsurugi Higashikata, featured in the eighth part of JoJo's Bizarre Adventure, JoJolion. It is an ability Stand that allows Tsurugi to create living origamis that make anyone who touches them confuse objects.

A phone turned into a frog origami

Paper Moon King also appears to allow Tsurugi to impart actual qualities of the object depicted in the origami into the creation. For instance, Tsurugi can shape an origami cicada that can fly or origami frogs that can hop and move on their own.[2] Tsurugi can also make vehicles that emulate their respective behavior and movement.[3]

Tsurugi could also fold hard objects into the shape of origami, such as Yasuho's cell phone.[4] 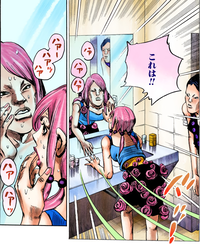 Once an individual comes into physical contact with an origami model, Paper Moon King can distort, or even manipulate the individual's sensory abilities to perceive reality.[2]

This renders the victim unable to recognize faces, resulting in seeing the same face on all people, even in reflections and in artificial faces such as in mannequins or video broadcasts.[6] In addition to other people's faces, those under Paper Moon King's power cannot differentiate between bodies, and voices, as Yasuho still mistook Joshu for Josuke despite having a conversation with him.[7] Moreover Tsurugi's victims can only read the same sentence in every text they might see.[7] Paper Moon King can also make its victims confuse two specific objects or people; for instance, Tsurugi made Aisho Dainenjiyama see all leaves on the ground as Yasuho's origami phone,[8] and multiple buses appear as Jobin Higashikata.[8] This ability was also used to disguise a regular tree branch as the Locacaca branch, fooling Josuke and Poor Tom[9] 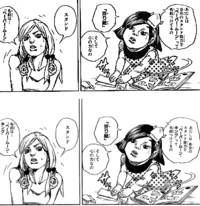