The Brothers Nobody Knew: Collyer Brothers 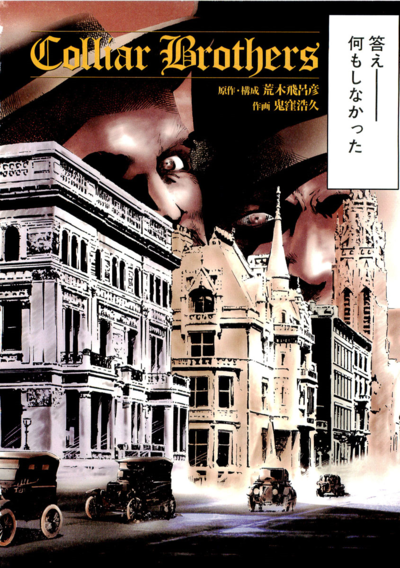 #2, 2002
“
During the 20th century, just what exactly did these two brothers accomplish? Absolutely nothing.
”
—Cover page

The Brothers Nobody Knew: Collyer Brothers (誰も知らない兄弟『コリヤー兄弟』, Dare mo Shiranai Kyōdai "Koriyā-Kyōdai") is the third chapter of The Lives of Eccentrics series, written by Hirohiko Araki and illustrated by Hirohisa Onikubo. It was originally published in the second issue of Manga Allman in 2002.

The story narrates the life of the Collyer Brothers: Homer (born 1881) and Langley (born 1885). Although they attained notoriety, they accomplished exactly nothing of note except hoarding goods in their home.

Their life is narrated through a series of interviews. A merchant recalls selling to the Langley a car, although he doesn't know what Langley did with the vehicle afterwards. An old woman named Ms. Bender recalled that she was engaged to Homer, but that he abruptly ended their relationship. A real estate agent explains how the Collyer brothers lived in Harlem, which was (at the time) a rich neighborhood; but that the influx of black people drove the elite away. One of Langley's old classmates then shares that the Collyer brothers' father, a doctor, abandoned his family. This caused the brothers to disconnect themselves from the world. Finally, a shopkeeper narrates how he dealt with the brothers and used to sell them more than a hundred oranges each week to cure Homer's blindness; one day, Langley suddenly stopped buying oranges, asking the shopkeeper to deliver newspapers to them instead.

It is revealed that the interviewers are a duo of burglars who are interested in the Collyer brothers and their family fortune. Convinced that the brothers are hiding a huge fortune in spite of their strange way of life, the leader of the pair decides to sneak in the house with his acolyte. After breaking the front door open, the burglars find the entryway barred by a massive array of furniture, which the leader interprets as a barricade against intruders. With all the windows barred and the backdoor blocked, the burglars must find a way through the furniture.

The acolyte finds a tunnel behind a drawer, but it is revealed to be a trap covered in cacti. When they finally cross the first barrier, the acolyte finds a dollar bill on the floor. When he tries to pick it up, however, his finger is bitten by a rat that was formerly trapped under the bill. Angered, the acolyte decides to go first through a tight passage, just so that he can reach the Collyer brothers first and get revenge for himself. However, he steps on a piano key, triggering yet another trap - causing an ice pick to pierce his leg, and subsequently releasing a bundle of firecrackers which fall into and explode inside of his mouth. As the acolyte gesticulates, he triggers another trap, and is covered in a flammable liquid. After surviving the subsequent explosion, the leader manages to reach the Collyer brothers' room. However, when he opens the door, he discovers the corpse of Homer, in the process triggering a final trap that launches a car at him.

When the police finally investigated the house, they found Homer's corpse and determined that he had died of starvation. After clearing out the house, the police also found Langley's corpse: he had been killed by one of his own traps while delivering food to his brother. The brothers' possessions were sold at an estimated 100,000 dollar value, which was subsequently given to a family relative.

One last interview is shared, in which a doctor recalls an incident in which a man's wife died of diabetes. Strangely, the man hid his wife's death and buried her beneath his house, refusing to acknowledge her death publicly or answer any questions about her. This facade lasted for years before a relative's inquiry led the police to discover the corpse. The man had never reported the death of his loved one simply to preserve his tranquil, quiet life.