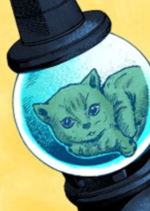 Manga Debut: JJL Chapter 11: Family Tree (Mentioned only)
Namesake: Yoshihiro Kira (Part 4 character)
Yoshiteru Kira (吉良 吉輝, Kira Yoshiteru) is the father of Yoshikage Kira and late husband of Holy Joestar-Kira. He was born in 1945 and died in 1991 according to the Higashikata Family's recording of the family tree.[1]
Teru Higashikata 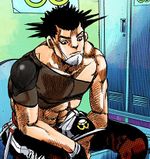 Manga Debut: JJL Chapter 50: Vitamin C and Killer Queen, Part 1 (Flashback)
Atsunori Iwakiri (岩切 厚徳, Iwakiri Atsunori) is a star pitcher for the Seiten Birdies baseball team, nicknamed "God shoulder A-kun" by the crowd. In 2009 he had a salary of 300 million yen. However, in 2010 he damaged his shoulder with small hope of recovery and went on the disabled list just before he was going to be accepted into the major leagues. Desperate, he bought a Locacaca fruit for 200 million yen from Aisho Dainenjiyama to heal his shoulder. He made a full recovery in exchange for his teeth and lower jaw, which turned to stone. His namesake is the Iwakiri ward in Sendai.[2]
Zaihei Nigatake 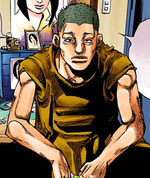 Manga Debut: JJL Chapter 56: Milagro Man, Part 1
Zaihei Nigatake (苦竹 財平, Nigatake Zaihei) is a man who tricked Joshu Higashikata into being cursed by the Milagro Man's money, which he received by stealing from a cursed man in Europe who was pretending to be homeless. Once confronted, he explains the curse to Joshu and gives him advice on how to get rid of it. Joshu decides to return the curse to Zaihei using his Stand, and walks away afterwards, leaving Zaihei overwhelmed by the Milagro Man's money. His namesake is the Nigatake ward in Sendai.[3]
Rena Nanami 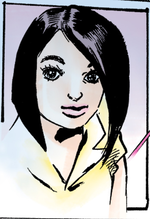 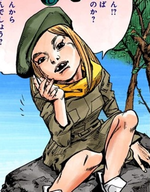 It is implied that the gates closing in on Mina was actually a calamity caused by the hospital director, as Mitsuba saw him standing near the gates moments after the incident on the school monitor.