This is a list of minor items appearing in JoJo's Bizarre Adventure: Phantom Blood

The items featured in this list do not have enough information to justify an article, mainly due to lack of relevance, but are still notable.
(Note: Blue buttons link to separate pages) 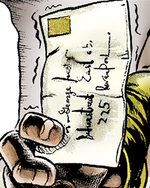 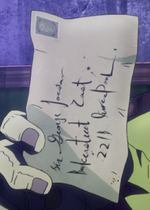 A letter sent by Dario Brando to George Joestar asking him to take care of his son Dio. It was then put into a box in the library of the Joestar Mansion and forgotten. Seven years later, Jonathan discovers it by accident, realizing that Dario was suffering the same symptoms as his currently sick father, George. This leads Jonathan to suspect Dio of having poisoned his own father and George as well. The address on the letter is changed from "225 Baker Street East, Liverpool" to "221B Baker Street East, Liverpool" in the anime, making it a Sherlock Holmes reference.

Manga Debut: Chapter 1: Prologue
Anime Debut: Episode 1: Dio the Invader
A doll belonging to Erina Pendleton. A pair of brats harass her and take it from her, threatening to tear its clothes off. They are stopped by Jonathan.
Statue of the Goddess of Love 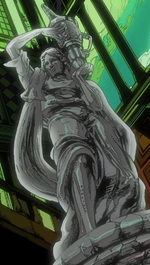 Manga Debut: Chapter 2: Dio Brando the Invader, Part 1
Anime Debut: Episode 1: Dio the Invader
A statue of a woman draped in a toga holding a jar. It represents what may be implied to be the Roman Goddess of Love Venus, said to be the guardian of the Joestar Family. Situated in the main hall of the Joestar Mansion near the main stairs, it was used to impale Dio when the Mansion was burning down, imprisoning the Vampire in the inferno.

The statue of the Goddess of Love is featured in the Joestar Mansion stage of Eyes of Heaven. As a dramatic finish, the defeated enemy falls off the railings and is impaled by the statue. While the demo of the game actually displayed the character being stabbed by the statue, it was censored in the final version of the game with a white flash.

Manga Debut: Chapter 6: A Letter from the Past, Part 1
Anime Debut: Episode 2: A Letter from the Past
A slow poison from Asia sold by Wang Chan to Dio Brando. Dio used that poison to kill his own father and disguise his murder as sickness, and planned to do the same with George. When Jonathan found Wang Chan, it instead incriminated Dio.
Dio's Coffin 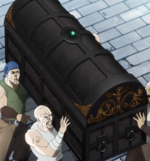 Dio used a reinforced and booby-trapped coffin carved with his name in golden capital letters as a shelter on the boat which transported Jonathan and Erina to America. Though Dio planned to use it to shelter himself with Jonathan's body, it became a makeshift lifeboat for Erina, her unborn child, and the infant Lisa Lisa when the boat exploded and sank. It then somehow served as Dio's shelter at the bottom of of the Atlantic Ocean, and the coffin wouldn't be pulled back to the surface until 1983, freeing the Vampire from his underwater tomb.