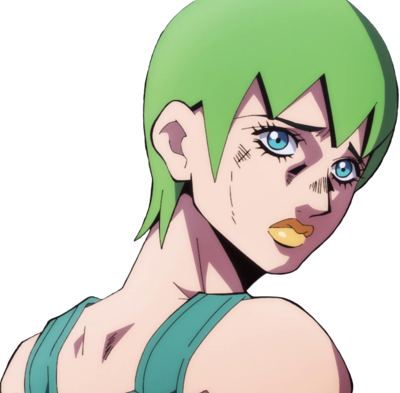 Killed by the detonation of her Like a Virgin bracelet

Atroe (エートロ, Ētoro) is a tertiary character featured in the sixth part of the JoJo's Bizarre Adventure series, Stone Ocean.

She is one of the inmates of Green Dolphin Street Prison who is sent to search for the missing prisoners. After her death at the hands of Foo Fighters, her body becomes the host of the Stand.

Atroe is a young woman of average height and slim build. Her hair is styled with serrated edges on her head. She wears a simple prison jumpsuit with "G.D. st JAIL" imprinted on the back.

After being assimilated by Foo Fighters, her body is capable of bending itself to the Stand's will.

Atroe first gives off the impression of a shy prisoner who is an easy target of bullying for the other inmates. The reason why she decided to join the search party is so that she has time off of being bullied in prison. As revealed by Foo Fighters, Atroe had a childhood dream of getting kidnapped, purposely getting lost in department stores.[4] In fact, she kidnapped a child for ten days for sport.[4]

After her death, Atroe's body is used as a vessel for Foo Fighters, a sentient colony of plankton.

As a child, Atroe had an odd obsession with being kidnapped. She considered being swept away and would let herself get lost in department stores. When she became an adult, she kidnapped a child for ten days. She didn't do it for ransom, and only did it for sport. She ended up getting sentenced to seven years at Green Dolphin Street Prison.[4] In prison, Atroe would get constantly bullied by the other inmates.[5]

At a certain point, Atroe read about the death of Gloria Costello in a newspaper.[1]

To take some time off being bullied, Atroe volunteers to join the search party searching for the missing prisoners. She investigates the farmlands along with Jolyne Cujoh, Ermes Costello, and two other inmates. When the group realizes that there is suspiciously a sixth inmate among them, Atroe is asked by Jolyne when the sixth person arrived. Atroe replies that she doesn't know. Suddenly, the six prisoners' bracelets, which were designed to explode if they were over 50 meters away from the search party guard, start making strange sounds. Foo Fighters, who has killed the search party guard, steers his body away from the group, causing Atroe's bracelet to explode, claiming her life.[5]