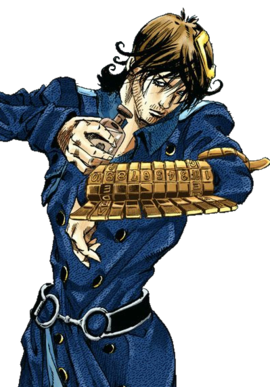 D-I-S-C-O  (ディ・ス・コ, Di-su-ko) is a minor antagonist featured in the seventh part of JoJo's Bizarre Adventure, Steel Ball Run, specifically in the "Chocolate Disco" story arc. D-I-S-C-O is the last of the assassins sent by Valentine.[1] He confronts Gyro, separating him from an injured Johnny, near Independence Hall

, Philadelphia. He is a Stand User, wielding the gauntlet-like Chocolate Disco.

The series is known for alternating colors between media, the information presented below may or may not be canon.
Skin(Fair)
Hair(Brown, golden-yellow hair clip)
Eyes(Cyan)
Outfit
(Blue coat lined with black buttons, silver handcuff-belt)

His Stand's name is all he's got to say 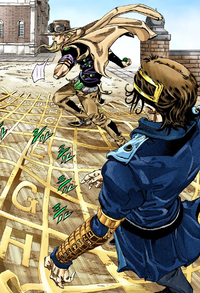