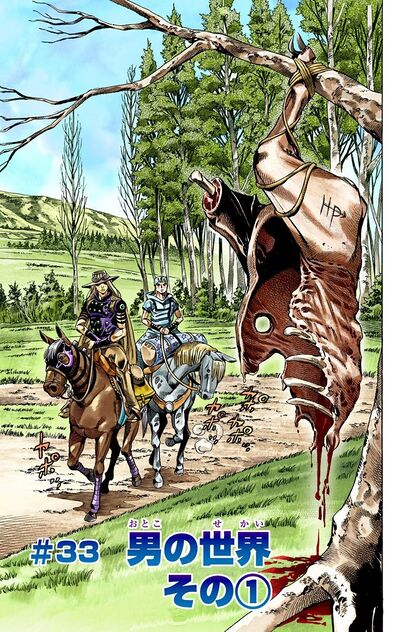 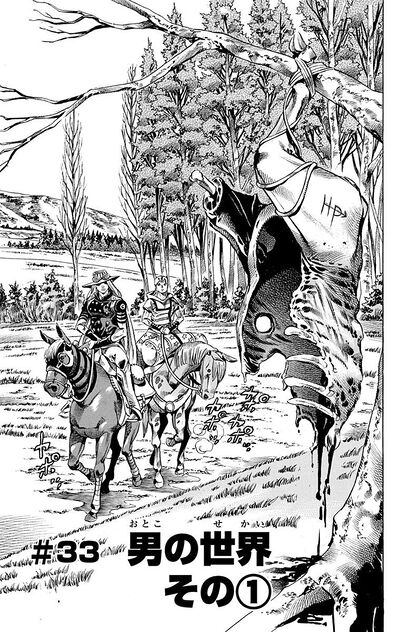 The 4th Stage begins, 1250 km from the Rocky Mountains to Kansas City.

On the 11th day of the stage, approximately 650 km from Kansas City, Johnny and Gyro see a fresh cow carcass hanging from a tree. Having taken some meat from it, they soon encounter Hot Pants, the winner of the previous stage. Hot Pants takes no time confronting them, accusing them of having killed his cow, and fights them. Hot Pants quickly gets the upper hand with his flesh spray Stand, Cream Starter, and blocks their eyes, nostrils and mouths with flesh. Johnny manages to prove that they weren't the ones to kill the cow, making Hot Pants stop his attack; however he refuses to apologize. Johnny asks Hot Pants if he acquired his Stand ability in the desert during the second stage, to which the latter mentions having no interest in.

After Hot Pants departs, Gyro reveals he has seen the word "TURBO" with further inscription within the letters. Using a binary system he decrypts the coordinates of the next Corpse Part near Kansas City, which also happens to be the finish line of the 4th stage. Twenty minutes later, Gyro and Johnny notices that they keep coming back to the road where they came from, despite having a map. They meet Hot Pants again who has the same problem and proposes a temporary truce to which Gyro and Johnny reluctantly agree with. Hot Pants, spotting a nearby house, decides to ask the inhabitant in it for directions. However, they also meet the distressed Gaucho, who challenges the inhabitant to a duel. A man gets out of the house; Gaucho warns him one last time to give him a way to get out of the forest, but the man tells that only when he dies, that he will get out of the forest. He accepts the challenge, fatally shoots Gaucho, and returns inside the house. After witnessing the duel, the trio decides to flee the scene and try their luck in finding the main road once again.