From JoJo's Bizarre Encyclopedia - JoJo Wiki
(Redirected from Break My Heart, Break Your Heart (1))
Jump to navigation Jump to search 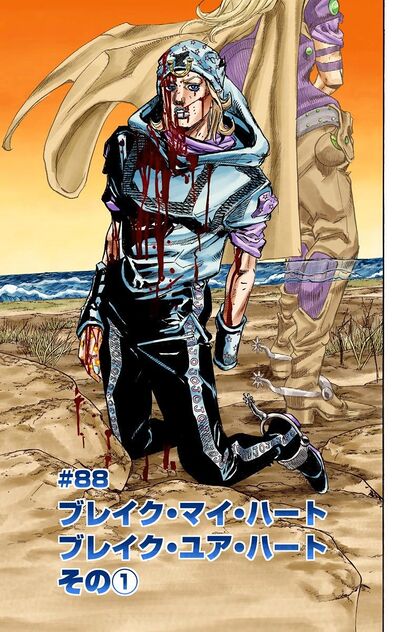 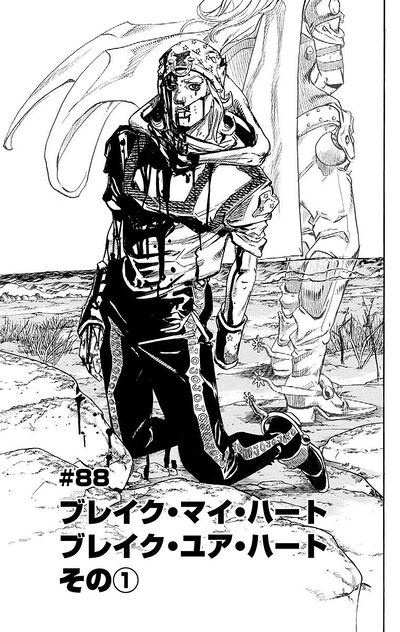 Johnny is taken aback by the proposition, and almost shoots Valentine. The President begs him to hold his hand, as he's utterly defeated and at his mercy. Valentine explains that only he can bring Gyro back while the Corpse is dissociating itself from Lucy. Valentine elaborates further that his goal was only to collect the Corpse Parts and since Gyro is in the ocean, the alternate Gyro will be safe from annihilation. In exchange, Valentine wants Johnny to cancel the infinite rotation by shooting him will a nail bullet rotating in the opposite direction.

Johnny retorts that the Gyro he will bring back won't be the same Gyro he befriended, but Valentine argues that this is irrelevant, and the only relevant fact will be that Gyro will once again live in this universe. Valentine then adds that his desire to obtain the Corpse is out of patriotism; it is out of duty for his country that he has to seize it and guarantee the safety of his people by not letting it bless another person at America's expenses. He explains that the race was the most peaceful course of action which guaranteed the least necessary sacrifices.

Johnny wants to believe that Valentine is indeed righteous, but still has his suspicions and demands a proof that Valentine will hold his word. Valentine then brings out Cream Starter which he took from Hot Pants earlier and tosses it to Johnny, enabling him to heal Slow Dancer. Valentine finishes his argument by presenting his handkerchief, explaining his father's sacrifice and telling Johnny that he wished he could find his father within the alternate dimensions. The argument resonates deeply with Johnny, and he concedes that Valentine may indeed walk the righteous path.

Author's Note
“
The word I've used the most this summer is 'hot'. How often you ask? Like several dozen times a day.
”
—Hirohiko Araki
“
今年の夏、一番多く使った「ワード」は「暑い」ですね。一日何回？まさか何十回かも。
”
—Hirohiko Araki