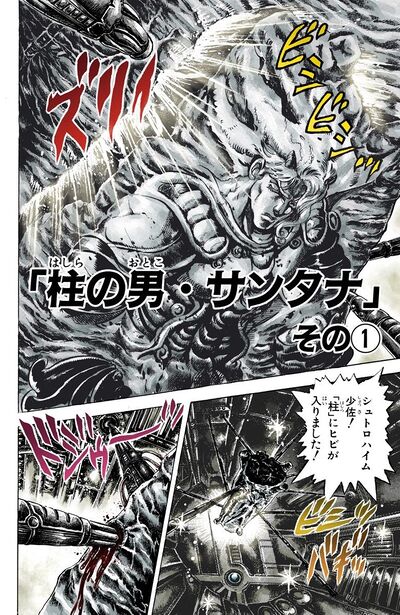 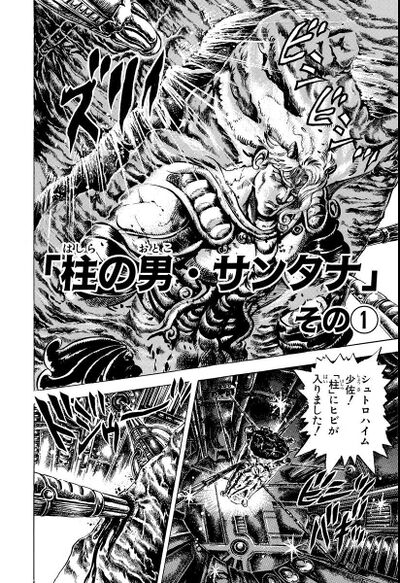 The stone pillar begins to rupture as more blood is pumped into it. Speedwagon is in distress, but Stroheim assures him that the room the pillar is in is impenetrable from the inside and out. Moments later, the pillar bursts into a pool of blood, and the man who was embedded in it emerges and crashes onto the floor below. After ordering a rinsing of the blood, Stroheim decides to name the being from the pillar "Santana", after the Northern Mexican Winds "Santa Ana".

Santana attempts to situate itself off the ground by standing up, but ends up falling on its face, to Stroheim's hilarity. To experiment with Santana's true nature, the Germans release a starving slave-turned-vampire into the room, and the vampire attacks Santana. When Santana is seemingly blocked by the vampire, Stroheim and his scientists panic and try to save Santana by blowing the vampire's head up but it ends up being absorbed into Santana's body. They discover that the Stone Mask merely serves to create food for the Pillar Man.

Author's Note
“
We're going on a trip mid-January, but this new year is going to be nothing but work, work, work! All of my assistants, thank you very much for your hard work!
”
—Hirohiko Araki
“
一月中旬旅行にいこうと、正月は、仕事、仕事！アシスタントのみんな、御苦労様です
”
—Hirohiko Araki