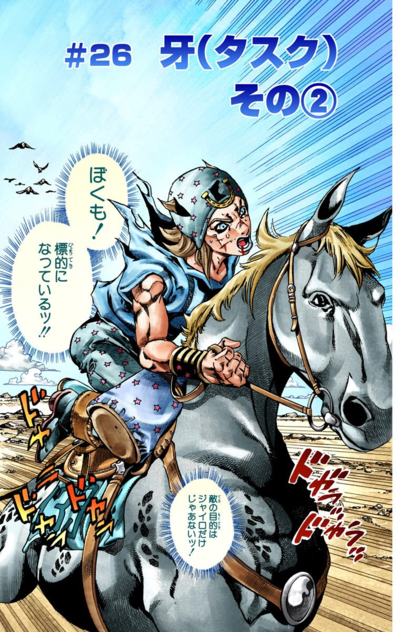 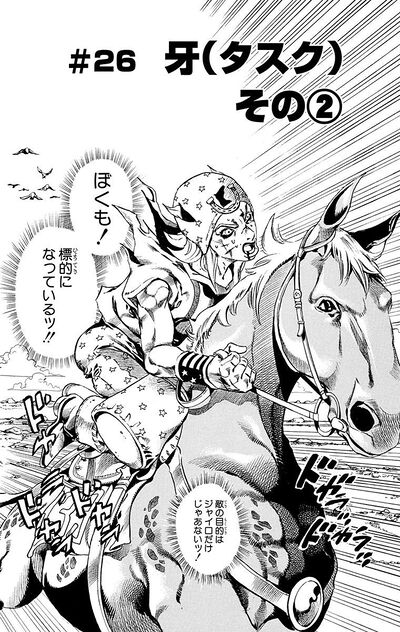 Johnny tries to uncover from what whatever was dragging him upward when Slow Dancer disappears too. On the ground, Johnny looks at the sky and see a hooked cable coming out of a bird feather hook his cheek; the cable proves to be too sturdy for Johnny's spinning nails who settles on cutting his own cheek to release the hook, dragging his pack with it. Two hooks then come out of feathers near Johnny, and he hides under a rock. Safe for now, Johnny thinks, and concludes that his aggressor is searching them, aiming to take the Left Arm he has with him.

The narration confirms his suspicion, showing the Pork Pie Hat Kid, user of Wired and agent of the government, looking through the packs, having hung Gyro by his hair. Johnny then knocks a beetle over, only for a hook to come out of under its abdomen, hooking Johnny's left arm. The Left Arm almost comes out of Johnny when his Stand appears before him, murmuring "Movere crus" and activating the Spin on his toenails to Johnny's astonishment. The toenails are propelled with enough force to cut the rock and knock the beetles away and some come through the "portal" connecting the beetle to Pork Pie Hat Kid's water bowl, hurting him.

When the Stand engraves the words "Movere crus" on Johnny's arm, Johnny understands that the Left Arm is only a part of an entire Corpse and that the race is a cover to gather its parts. Using the Pork Pie Hat Kid's confusion, Gyro also slipped a Steel Ball through the portal, indicating his position to Johnny. The ex-jockey proceeds to crawl toward the Pork Pie Hat Kid's position, hidden under some dirt to camouflage himself.