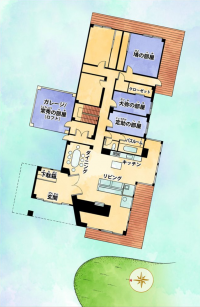 A map of Higashikata House

Designed by architect Yotsuyu Yagiyama,[1] the Higashikata household is a large, modern building located on a hill near the coast of Morioh, at the front of an expanse of land utilized for fruit trees and other constructions. It is inspired by the works of architect Frank Lloyd Wright and thus is quite angular, presenting itself in the form of more or less a rectangle over two levels. Its exterior is made of bricks, its flat roofs is made of wood, and there are several balconies on the southern side of the house. The living room has large windows in place of the walls, letting the people inside see the Wall Eyes nearby. The entrance area is covered by a roof, which is itself supported by a pillar of bricks.

The house itself is 61 meters to the gate according to Josuke's estimation.[2] When one enters the house, they usually do so through the front gate with is made of glass and enter into a foyer separate from the living room with a double door. The living room is a rather large room that combines a normal living room with the kitchen and the dining room. The living area has a couch and two chairs, all with a modern design. A one-wall modern kitchen is somewhat separated from the rest of the room with a counter. The dining table is situated on the northern side of the living room. The rest of the house is then axed around the main corridor.

Going from the left side of the corridor, one can visit the following rooms: a laundryroom which also contains also the cabinet housing the house's security camera system,[3] a corridor leading to the garage, then a staircase leading to the second floor, Jobin and Mitsuba's room, then at the end of the corridor, Jobin's office, then Hato's room. Going back towards the living room, there is a closet, then Daiya's room, Josuke's room and then the bathroom.

There are other rooms on the second floor, such as Norisuke's office[4] and another room which serves as Joshu's current bedroom. It is unknown if there are more rooms up there. The Higashikata House is partially wrecked by a piece of a plane which fell into the house, destroying the living room.[5]

A bunker-like dwelling was constructed to house the architect while the estate was built. Tsurugi is found here by Yasuho while pressured by Yagiyama. The bunker sprawls under the entire property, with hidden tunnels leading to several secrets entryways such as a hollow tree, from which Tsurugi brought Yasuho to the basement, or another hidden entrance camouflaged in the rocky slopes of the estate which Rai Mamezuku and Josuke used to spot the Locacaca branch.[6]

An area behind the house opens to a trail that leads up the side of the back yard. The trail is surrounded by various fruit trees, forming their own orchard. The fruit trees are one of the Higashikata Fruit Company's assets. The garden used to have a small garden house that has been brought down by the recent earthquake, although a hatch to the basement is still accessible.[7] Josefumi Kujo had grafted a Locacaca branch onto one of the trees in the orchard.

Following the events of Ozon Baby's Pressure, the orchard has been devastated by a fire.[8] 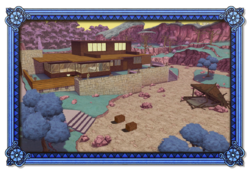 The Higashikata House is an available battleground in Eyes of Heaven.