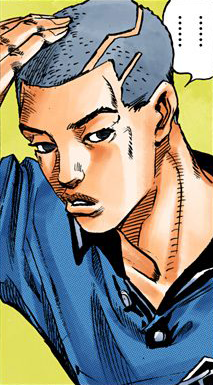 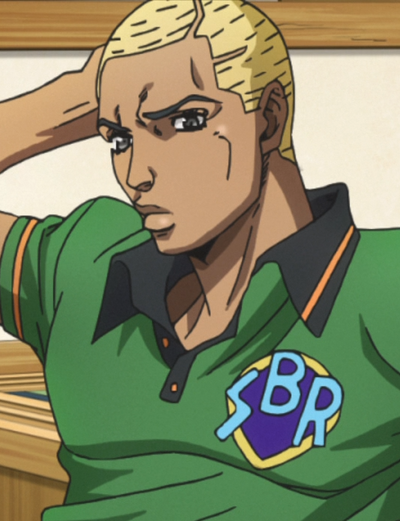 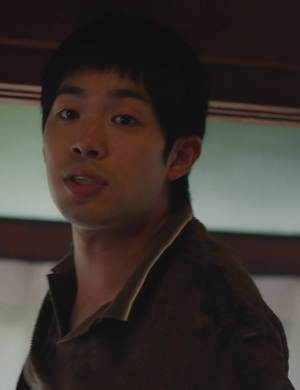 Gunpei was a part-time gardener for the Osato family and more importantly, the secret boyfriend of Naoko Osato, the Osato's heiress. However, Gunpei was accidentally killed by Naoko during a fight.

Gunpei Kamafusa has a shaved head with a line going across his hair in the shape of a lightning bolt along with a smaller line below it. He wears a polo shirt and shorts which both bear an "SBR" logo on the side.

Gunpei seems to have had a violent and impulsive personality. Prior to their breakup, he had hit Naoko Osato in retaliation after being slapped by her and tried to grab her by force, though he immediately felt sorry for his actions and begged for forgiveness, saying they didn't need to break up and that she shouldn't tell anyone about what happened.

Gunpei is a part-time gardener working for the wealthy Osato family. He is in a relationship with Naoko, the only daughter of the family, but must keep this a secret, as her overprotective father would never allow them to be together. Gunpei notices that Naoko was starting to be cold towards him, which leads to him suspecting she may be seeing someone else. When she tries to break up with him, they get into a fight which ends with Gunpei getting pushed towards a golf club. Naoko confesses that her family had decided, long before she met Gunpei, that she would marry Shuichi after she graduates, not noticing that the impact had lodged the golf club in the back of Gunpei's head, killing him.

Shuichi and her father arrive and, despite her efforts, Naoko is unable to contain the continuous and seemingly infinite spray of blood gushing out of Gunpei's wound to the point of leaving his body desiccated in mere minutes. Worried that someone may find his body and that the blame will fall onto her, Naoko hides Gunpei in the guest room. She arranges the corpse in such a way that his blood flows into a glass bottle, which she empties every morning so as to keep her secret hidden.

Even though all signs of life had left his body, he seems to be "continuously dying" no matter how many years passed. Naoko notices that his face rejuvenates for a few moments when lightly misted with water. When their guest room is going to be demolished for reconstruction, Naoko moves his body to the attic above her bedroom's closet.

Still in love with Gunpei despite being married to Shuichi, Naoko somehow becomes pregnant with the corpse's children, eventually giving birth to a girl, as well as a boy who wants to grow up to be a gardener like his father. It is later discovered that Gunpei was possessed by the Mutsu-kabe Hill Yokai, a creature whose only goals are to die in front of someone and leave behind its descendants.[1]