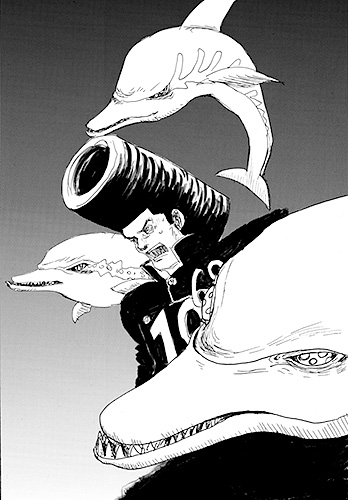 Grand Blue (グランブルー, Guran Burū) is the Stand of Muryotaisu Nijimura, featured in the light novel JORGE JOESTAR. Grand Blue is a trio of flying dolphins that its user and others can ride on for quick transportation.

Grand Blue manifests as three dolphins with slightly different designs resembling a stream of water extending from their eye to their tail on each body. They have sharp teeth and their eyes also have different designs, such as multiple irises or jagged lines on the sclera.

Grand Blue was originally only one dolphin when Muryotaisu was younger, but later evolved into being three.[1] The dolphins are named Jacques (ジャック), Enzo (エンゾ), and Johana (ジョアンナ), based on characters from the film The Big Blue.

They act like real dolphins by swimming in circles and doing flips. They respond to their rider's orders by chirping and squeaking like "Kiki" (キキッ). Jacques has a habit of getting excited and competing with the other dolphins. He riles up Enzo and Johana to bound across the ground by leaping and diving while they're flying but they suppress the behavior when ordered to by Muryotaisu in urgent situations.[2]

Grand Blue's destructive power is seemingly weak, but the dolphins are capable of breaking through windows.

The dolphins can fly extremely quickly as if they're swimming through the air. A location that would ordinarily take twenty minutes to travel to in a taxicab can be reached by Grand Blue in only two minutes.[2]

Traveling on Grand Blue is much gentler than physics would ordinarily allow. Centrifugal forces, g-force, air resistance, and inertia become entirely ignorable. Despite the rapid speed of their flight, Jorge Joestar barely feels the wind on his face.

Muryotaisu can share his dolphins with anyone he wishes. Two people can ride on a dolphin and the dolphin will obey its rider, as long as they don't conflict with Muryotaisu's orders. The dolphins can travel far away from Muryotaisu along with their rider, such as how Johana travels with Jorge to a room in the Cube House and Muryotaisu later sends all three dolphins to go retrieve Vinegar Doppio.