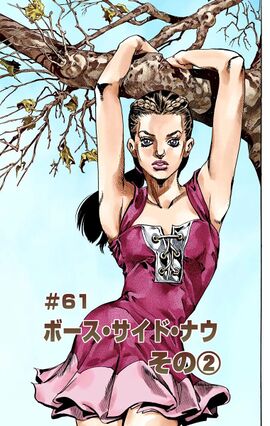 It narrates Wekapipo's protection of Steven Steel against Magent Magent as Lucy is unmasked by Funny Valentine.

The 28th of December 1890 3:51 PM, Gyro and Johnny enter Philadelphia and finish the seventh stage at the sixth and seventh place. Seeing that Diego is once again a serious contestant, having finished that stage at the first place, they decide to confront him and steal the Left Eye from him. The eighth stage begins, a 140 km race from Philadelphia to New Jersey.

A little before 2:45 PM, Steven Steel ruminates in his coach, still convinced that his wife isn't dead. Comparing a recent photo of the First Lady and one of Lucy, Steel concludes that somehow she disguised herself as Scarlet Valentine. However, he is immediately shot in the chest by Magent Magent, as Steel is no longer of any use to Valentine's plan. Soon after, Wekapipo approaches Steel's coach in the hopes that he can help him find Lucy. He discovers instead Steven gravely, but not fatally wounded. Magent tries to ambush Wekapipo but fails, and a fight at the top of the coach ensues as the startled horses begin to gallop in the streets. Wekapipo discovers too that Lucy is disguised as the First Lady, and resolves to kill Magent Magent before going to the Independence Hall.

Meanwhile Valentine and a disguised Lucy play the violin in the Independence Hall. Valentine forces himself on Scarlet, commenting of her charming manners, but unbeknownst to him, the Right Eye is rolling toward a room next to theirs.

A flashback details the past of Lucy Steel née Pendleton. Her father was a farmer who indebted himself with the mafia. The mafia had a policy to take only one thing from his clients and the father chose to sell them a then 12-years-old Lucy. At the same time, Steven Steel came before him and proposed Lucy in marriage. Being told that Lucy was the Mafia's property, Steel proceed to bluff them by telling them he took her virginity already and marries Lucy at the price of a small scandal about their age difference. Grateful, Lucy developed a deep emotional yet platonic bond with Steven.

Intrigued by his wife's strange behavior, Valentine decides to check the next room. For fear that he discovers the Right Eye, Lucy tries to distract Valentine by asking him why he's following the race so closely. Valentine then exposes his philosophy that one needs the respect of the people to have power, and that by the end of the race he will have the means to force the respect of the entire world. Aroused, Valentine tries to rape his wife's impersonator, not caring who they really are, but when Lucy reveals herself, Valentine is stunned and is stabbed in the throat with a knife. Agonizing, Valentine mysteriously disappears when a chair falls over him. He then reappears safe and sound, to Lucy's horror.