From JoJo's Bizarre Encyclopedia - JoJo Wiki
(Redirected from Alternate Ermes)
Jump to navigation Jump to search
English
русский
The name used on this page is from a source not written by Araki. As such, it may or may not be considered canon. 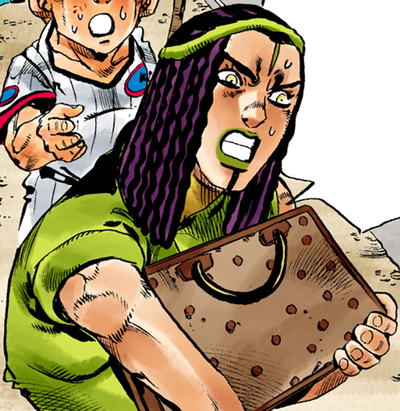 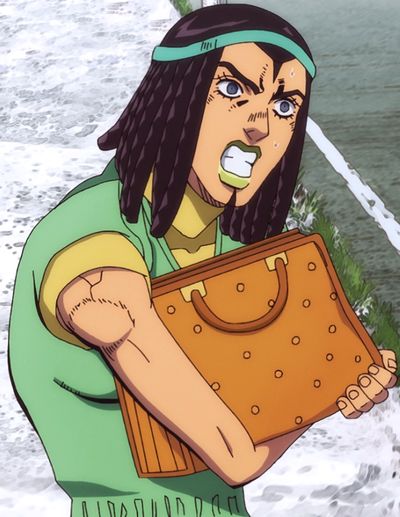 Eldis is the reincarnation of Ermes Costello after the universal reset by Pucci. She meets Emporio after getting off a bus for some change.

Eldis is identical to Ermes in appearance, though in a different attire consisting of a fringed dress, on-top of a turtleneck, pants and a band around her hair. She also carries a handbag with her.

Though she only appears briefly, Eldis seems to be just as crass as her original counterpart but without her harsh background as she wasn't imprisoned. She mentions her sister telling her never to ride with strangers in response to Anakiss and Irene's offer of a ride.

After killing Ermes Costello, Pucci uses Made in Heaven's ability to accelerate time until the universe reached a new beginning. Pucci's explains that, once a person dies, their soul can never be reborn into the new world. However, after Pucci is defeated at the hands of Weather Report's Stand, Emporio finds a woman named Eldis who seems to have inherited Ermes's soul but with different memories.

Eldis gets off a bus at a gas station next to Green Dolphin Street Prison. She asks a kid loitering around for some change for her $50 dollar bill, but the bus drives off soon after much to her dismay. She blames the boy, but fortunately for her a man offers her a ride if she'll pay for gas and food. She declines at first, but when it begins to rain he taunts her. A woman in his car introduces both of them, Irene and Anakiss. Eldis begrudingly accepts the offer, but says that she won't pay more than $10 dollars, and demands that they stop at Cape Canaveral. Her and the boy get in their car, and along the way they encounter a hitchhiker.[1]