Weiß Schwarz (ヴァイスシュヴァルツ, Vaisu Shuvarutsu), or Weiss Schwarz, is a Japanese Collectible card game released by Bushiroad in collaboration with various other popular animation and video game companies. Series are divided into two sides: Weiß, German for "White" and Schwarz, German for "Black". 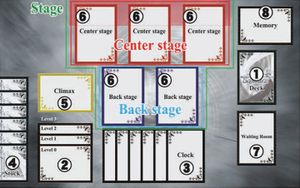 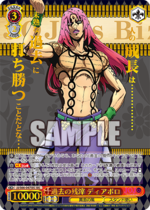 Players that have 7 cards in their Clock Area level up by 1. When this happens, the player selects any 1 card from the top 7 cards in their Clock Area, places it in the Level Area, and discards the remaining 6 to the Waiting Room. All additional cards past the aforementioned top 7 (the 8th and beyond, before discarding) remain on the Clock Area unless the conditions for a subsequent Level Up are met. Note that outside Level 0 Characters and Event cards, most cards cannot be placed unless their level matches the players and their color matches one card in the player's Level or Clock Area. i.e, a Red Level 3 Character can only be placed on the Stage if the player has reached Level 3 and has at least one red card in their Level or Clock Area.