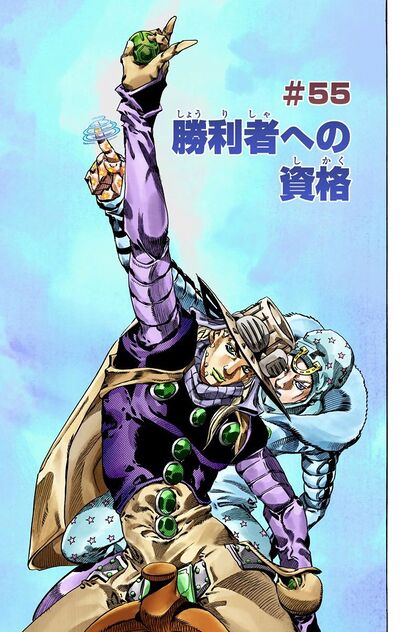 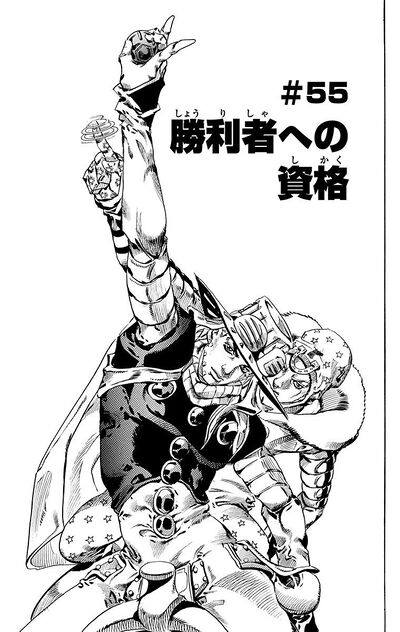 The Victor's Qualifications (勝利者への資格, Shōrisha e no Shikaku), originally The Sixth Goal (6度目のゴール, Roku Do Me no Gōru) in the UJ release, is the fifty-fifth chapter of Steel Ball Run and the eight hundred seventh chapter of the JoJo's Bizarre Adventure manga.

Johnny details the daily routine he and Gyro have had during the race and several key facts in their ability to keep going.

At the end of the 6th stage, every major contestant are again assembled for one final dash. Gyro and Johnny, currently ahead, are challenged by Pocoloco, who deviates right by Hey Ya!'s counsel. Johnny and Gyro suddenly see a ravine hidden in the snow, but combine a Steel Ball with Tusk ACT2 to make a metal rope which enables the duo to cross the ravine. Gyro ends the 6th Stage at the 1st place and Johnny at the 2nd place.

The 7th Stage beings: The Philadelphia Triangle, 1300 km from Mackinaw City to Philadelphia.

Meanwhile in the frozen straits, Magent Magent crawls back to civilization, having heard that the traitor is Lucy Steel.