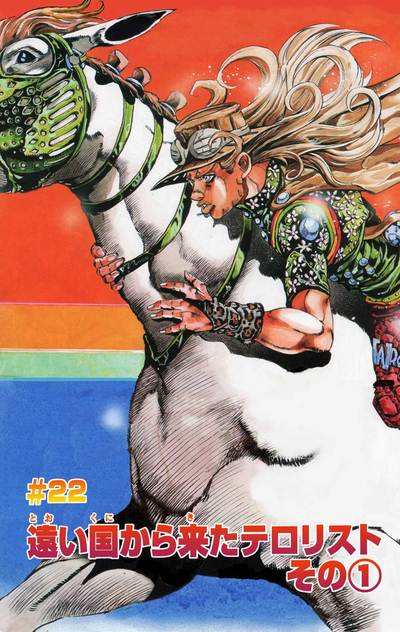 Oyecomova's past is discussed: he was a terrorist from Gyro's country, and managed to escape to America. Upon hearing that Gyro would enter the race to represent Naples, he began to chase him down. The fight becomes a race toward the Zombie Horse, a healing item sent for Gyro. After a long pursuit up a river, a combination attack from Johnny and Gyro manages to take Oyecomova down, and the duo continue the race.[1]

A flashback describes the past of Gyro Zeppeli. Gyro was born in the Kingdom of Naples, built to protect the Vatican. It had been maintained even after Italy's unification, but had many enemies. Gregorio Zeppeli aimed to cut any sentimentality from his life, as he believed it would only bring further suffering to the world, especially when he had to execute people. When one prisoner assaulted Gyro, causing him to lose his ceremonial collar, Gregorio blamed his son's sentimentality, making him drop his guard in front of the seemingly weak woman. Then, the collar was found in the possession of Marco, who had been sewing the damaged tissue out of duty. This is when Gyro met the boy, and took pity on him despite Marco being the first official execution Gyro would have to carry out.

Gyro and Johnny reach the location of the Zombie Horse, which takes the form of a crude horse fresco. Gyro then takes the string composing the fresco and sews his damaged leg with it. When Johnny asks if it is a gift from his father, Gyro refutes the possibility.[2]