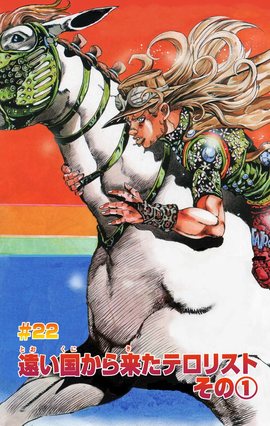 Oyecomova's past is discussed: he was a terrorist from Gyro's country, and managed to escape to America. Upon hearing that Gyro would enter the race to represent Naples, he began to chase him down. The fight becomes a race toward the Zombie Horse, a healing item sent for Gyro. After a long pursuit up a river, a combination attack from Johnny and Gyro manages to take Oyecomova down, and the duo continue the race.