From Behind (TV Drama) 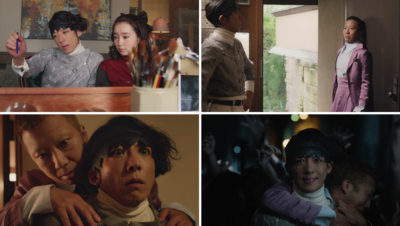 Japanese
“
It's a pretty common tale... The taboo of "not looking" at something which is forbidden from being seen.
”
—Rohan Kishibe

From Behind (背中の正面, Senaka no Shōmen, lit. The Front of the Back) is the fifth episode of the TV Drama series Thus Spoke Kishibe Rohan. It adapts the Cheap Trick story arc from Diamond is Unbreakable.

In this episode, Rohan Kishibe meets Masazo Kinoto, a businessman who constantly hides his back from sight. Curious, Rohan commits the mistake of looking at Kinoto's back and is assailled by a strange phenomenon. 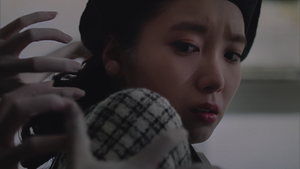 In an effort to research yokais and other supernatural phenomena, Kyoka Izumi heads towards an isolated alley bearing the sign Hirasaka (平坂, lit. "Flat Hill"). She is disappointed to see that the alley isn't a hill and therefore seemingly doesn't qualify as a boundary with the supernatural as Rohan Kishibe described it. She takes out her tablet and reads on a blog that one mustn't "look back" in this alley when hearing the Kagome Kagome song or else be unable to ever leave. Kyoka is startled when she hears the Toryanse tune play at the crosswalk nearby and turns back, but nothing happens. Frustrated at this seemingly false lead, Kyoka walks forwards until she notices that the tune has changed. Several hands appear behind Kyoka, ready to grab her, but though she notices that something's behind her and almost looks back, she's distracted by a call from the editor-in-chief asking for a meeting report due tomorrow and she rushes back to work. 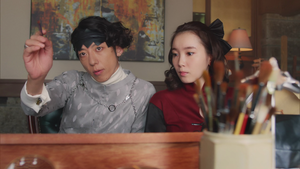 Rohan explains the rules of the supernatural

Later, Kyoka goes to Rohan's house. Seeing Rohan packing his bag, she assumes that he is getting ready to move out and declares that she'll help him keep his house. Rohan responds with sarcasm about Kyoka's concern over his home. When Kyoka says that she loves the house and its calm atmosphere, Rohan irritatedly tells her to stop treating his home like a cafe. Rohan tells her he's only leaving to gather references and will be back in a few days. He is due to give his next chapter in two days but Rohan is confident he can quickly complete by the next day. Kyoka asks him if he'll be going to Mutsu-kabe Hill Village, surprising Rohan. She mentions her extensive research on sloped places rumored to be haunted, and Rohan offhandedly compliments her intuition.

When Kyoka mentions that she's found next to nothing about Mutsu-kabe Hill, Rohan retorts that it makes the location more credible because it indicates that there is a taboo to write or even talk about the place. Kyoka shows Rohan her list of urban legends and other stories involving hills, commenting that she had just visited a place that was all flat even though it had "hill" in its name. Rohan explains that the "hill" (坂) is a wordplay on the word "boundary" (境目), with occult rules such as "Don't look back" being tied to the locations. Kyoka enthusiastically mentions a cursed hill where if one trips, then they will die in ten years. Exasperated, Rohan throws Kyoka out of the house to be able to draw and give his draft tomorrow. He angrily refuses Kyoka's list of supernatural places, puts her handbag on her arm, and closes the door shut. Frustrated, Kyoka goes down the hill and passes by a peculiar man with his back to a wall. She glances at the man several times but quickly forgets about him, instead remembering the alley she's just investigated. 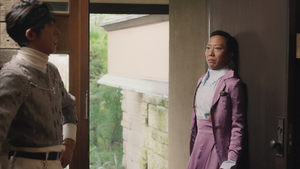 Meeting Masazo Kinoto, a man who hates showing his back

Meanwhile, Rohan is drawing his chapter. He suddenly hears a man knocking at his door. Rohan ignores the visitor until he hears that the visitor wants to talk about Mutsu-kabe Hill. Rohan thus deigns opening the door and nearly immediately turns him into a book with Heaven's Door. Reading his bio, Rohan learns that the visitor is Masazo Kinoto, an employee of the M.S. Resort company who has genuinely come to him to try to persuade him to resell the mountain range he's bought. Just to be safe, Rohan writes on Kinoto and commands him to be unable to harm Rohan. He also learns that Kinoto hates showing his back. Cancelling his power, Rohan invites Kinoto inside but Kinoto constantly sticks his back to the walls, unwilling to show it to Rohan. Even when Rohan gives him a cup of tea and puts it on the table, Kinoto merely slides over to take the cup. Rohan finally dares to ask what is wrong with Kinoto's back and the man answers that nobody has ever seen it. The manga artist's curiosity is piqued and he plans to see Kinoto's back. He takes a while to return and then pretends that he's lost the deed for the land but that it may be in the study on the second floor. On the way up, Rohan drops the key to the study and rushes to take it so he could position himself behind Kinoto but the man bends backwards to pick up the key and offer it to a flabbergasted Rohan. As he is about to enter the study, Rohan pretends that his back itches and asks Kinoto to scratch him. Kinoto reluctantly scratches Rohan, which allows Rohan to uncover a mirror on the wall and see the reflection of Kinoto's back. Rohan is initially disappointed but then Kinoto panics and something seems to burst out of his back, hidden by his suit. Kinoto dies on the spot and has to be evacuated by paramedics. 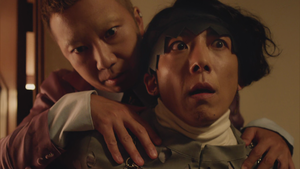 Possessed by a yokai

It is evening and Rohan is perplexed by what has just happened. He suddenly hears someone telling him to give Mutsu-kabe Hill back. Rohan is horrified to see Kinoto hanging on his back, repeating in a flat tone to give back the mountain. Even Heaven's Door cannot affect the thing on Rohan's back. Quickly understanding that the thing on his back is a yokai that has possessed him the moment he saw Kinoto's back and also killed Kinoto, Rohan firstly closes the shutter on his windows so that nobody can see his back. He tries to dissuade the yokai from possessing him but the latter doesn't listen. Startled by the sound of the rattling shutters, Rohan is forced to draw his chapter with a makeshift desk and with his back stuck on his bookshelves. Even then, the yokai manages to scare him by pretending that someone is watching his back and Rohan is considerably disturbed to the point he ruins a whole page. It eventually takes him the whole night to complete the chapter.

The next day, Kyoka arrives at Rohan's house to collect his manuscript. Rohan is only willing to slightly open the door and quickly hands the manuscript before shutting the door. However, Kyoka notices that Rohan looks tired and guesses that he's pulled an all-nighter. Rohan fears that he could have made Kyoka suffer his fate. Frustrated, Rohan has to exert his will to keep calm and he tries to analyze what happened to Kinoto. As Rohan returns to his office, a deliveryman opens the door to deliver his package. Rohan has to bend backwards and do an arch to hide his back. Incidentally, the deliveryman found a page in front of the door from Kyoka containing information about the alley and delivered it on top of the package as well. Rohan is inspired to fight back against the yokai and decides to go outside.

Outside, Rohan has to stick to the wall, to the surprise and amusement of passersby. When he reaches the streets, Rohan tries to call a taxi so that nobody will see his back but the yokai shows that the roads are too large for him to cross safely. Rohan has to do with walking on the sidewalk until he reaches a pedestrian bridge. There, the yokai says that Rohan is now stuck, but Rohan points out that Kinoto managed to make it to his house. He decides to stick his back to another tall thug-like man, walking backwards at the same pace. Amused, the yokai says that while Kinoto could reach Rohan's house, Kinoto wasn't bothered by the yokai. It then manifests itself to the tall man and insults him. The man turns and almost sees Rohan's back but Rohan uses Heaven's Door to force the man to walk forward and ignore him. 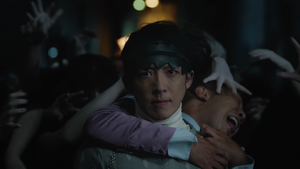 The yokai is taken away by spirits

Exhausted, Rohan finally collapses in an alley. Kyoka suddenly appears and asks Rohan what is wrong and Rohan has to shout to dissuade her from coming close. The yokai tells Rohan that he's at his limit and that he might as well show his back to Kyoka. Rohan suddenly laughs and reminds Kyoka about the rule "Dont look back". He shows Kyoka's paper with the rules of the place she's found, and explains that the alley they are in is actually connected to the "other world". He also reveals that he sneakily messaged Kyoka to have her meet him in the same alley. As the Toryanse tune plays and changes to Kagome Kagome, Rohan shows his back to Kyoka. Smiling, the yokai turns back to possess Kyoka but then Kyoka is turned into a book. The alley suddenly turns dark and the yokai thus sees a mob of spirits coming for him. Panicking, the spirit curses Rohan who regrets that he is unable to see the look on the yokai's face and mentions that he had other plans in mind. The spirits take the yokai away, freeing Rohan. The alley then returns back to normal. Kyoka wakes up and asks about the Kagome Kagome tune she's heard but Rohan pretends that nothing supernatural happened and tells Kyoka that they have to go back to work.

Up in the mountains is a house. Blood is briefly shown dripping before the episode ends.