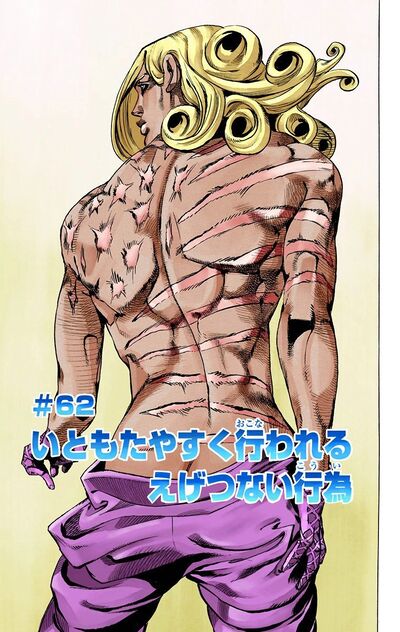 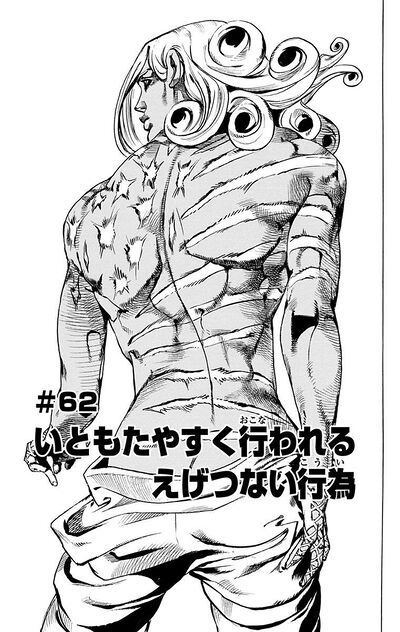 When Valentine stands up, revealing a glimpse of his Stand, Lucy has seemingly fled, and he begins to follow the clothes she has thrown away. However, Lucy actually hid within the room and silently crawls toward the room in which the Corpse was hidden. Valentine understands that Lucy's goal was the Corpse and heads toward the room where he hid it. Within the room, Lucy searches for an exit and looks up the chimney, and is engulfed in light and sees a Stand. When Valentine breaks into the room, he discovers that Lucy is now pregnant with the Head.

In the streets of Philadelphia, Wekapipo is looking for a way to kill Magent Magent, as he is now protected by 20th Century Boy. One of Diego's dinosaurs springs from Magent's coat and runs away; distracted by it, Wekapipo notices too late that Magent lit up dynamite. He uses one Steel Ball to protect Steven and another to induce left-side ataxia to the horses, making them turn to the right and propelling him and Magent into the Delaware. The dynamite explodes, and Wekapipo is gravely wounded in the process. Magent Magent uses that opportunity to try to shoot him, but he is tied up by a rope and dragged underwater by the hub of the carriage due to the Spin of one of Wekapipo's Steel Balls. Magent Magent is defeated, condemned to remain still at the bottom of the Delaware or drown.