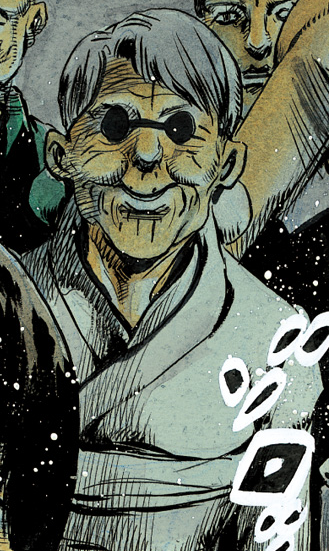 Kishibe Rohan Meets Gucci
“
Say... Rohan... If you ever catch that woman smoking, you let me know right away, okay?
”
—Rohan Kishibe's Grandmother, Rohan at the Louvre

Rohan Kishibe's grandmother (岸辺露伴の祖母, Kishibe Rohan no sobo) is an unnamed tertiary character featured in the one shot, Rohan at the Louvre, and briefly in Kishibe Rohan Meets Gucci.

She is the owner of an inn in Morioh and owns a Gucci bag which has its own Stand ability bound to it.

Rohan's grandmother is an elderly woman with small glasses obscuring her eyes. She has several wrinkles and white hair that is tied back in a bun. She is only seen wearing a kimono.

She has strict requirements with her tenants such as not allowing them to cook or bring any furniture. She seems to dislike loud noises as her rules include not allowing any animals, children, playing any instrument, or using a hairdryer. She almost wanted to refuse letting Nanase Fujikura stay at her inn because Nanase was married but was empathetic with her situation since she was about to get divorced. However, she still tells Rohan to keep an eye on Nanase to make sure she isn't smoking.

She also has an odd quirk of showing pictures of old hairstyles to mark whether the rooms in her inn belong to a man or a woman, rather than simply writing it out.[2]

Little is known about her, but she had apparently lived a cheerful life with her husband, as the co-owner of an inn located in the quarter of Morioh, in S City. After Rohan's grandfather died, she closed the inn and rented the rooms out by the year.

In 1996, she allows Nanase Kishibe to stay as a guest at her inn, but asks Rohan to keep an eye on her because she's afraid that Nanase won't follow the inn's rules.

In 2005, she dies from unknown reasons. A year later, when Rohan goes to the Louvre museum, she appears as one of the ghosts haunting her grandson and almost kills him. It is later revealed that it wasn't actually her ghost, but a creature created in her image with Rohan's memory by Nizaemon Yamamura's painting.

She is mentioned as being the prior owner of a Gucci bag with a Stand, which was her treasured memento. Rohan receives it after her death. She seems to have had some knowledge regarding Stands, or at the very least how her Gucci bag's Stand worked. The bag is capable of performing equivalent exchange with valuable items that are placed in it. While the items would disappear from the bag, they would return to their owner through some other means when they are in a dangerous situation.[3] 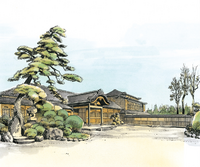 Her inn itself is very ancient and located far from the train station. Rohan is especially fond of it due to the soothing peacefulness and the hot water that came from a nearby hot spring.

Rohan's grandmother has a set of rules that she requires with respect to future tenants. Her conditions for admission are the following:

Couples and children are not allowed. The inn has a curfew as well, as its doors close at 10 p.m.

According to Rohan, the house was nearly empty due to these rules.