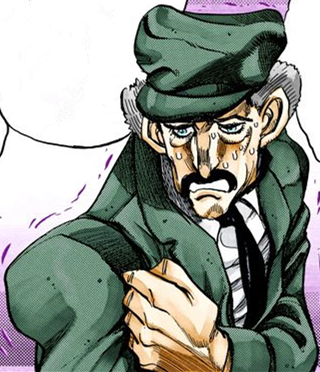 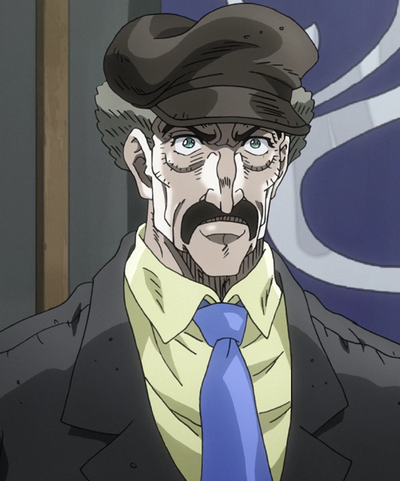 SC Episode 23
“
I've been working for the Joestar family for 30 years. I've known Lady Holy since she was in elementary school. I know I have to tell her the truth, but I don't have the heart to tell her...
”
—Roses, Chapter 246: Suzi Q Joestar Visits Her Daughter

Roses (ローゼス, Rōzesu) is a tertiary ally featured in the third part of the JoJo's Bizarre Adventure series, Stardust Crusaders.

Roses is a tall, elderly, muscular man with puffy hair and a thick mustache. He has several wrinkles and wears a newsboy cap. Roses also wears a suit with a collared shirt and tie underneath.

Roses is the driver and longtime butler of the Joestar Family. Due to his time as a butler, he grows close to the family and feels sentimental over them. He greatly worries when Holy Kujo becomes sick and struggles to tell Suzi Q Joestar how severe her daughter's situation is. Roses is familiar with Japan's customs and warns Suzi Q not to get into trouble, even scolding her when she almost gets attacked by a yakuza member. However, he puts up with her nonchalance and is capable of protecting her when a situation arises.[2]

As Suzi Q's bodyguard, he is a skilled fighter on his own despite his age. He easily manages to defeat a yakuza member with only a kick.[2]

Roses is hired as a butler for the Joestar Family around 1958, since Holy was a child. When Holy becomes sick and Joseph Joestar travels to Egypt, Roses is left to take care of Suzi Q.

The information below derives from the Stardust Crusaders TV anime which was not written by Araki. As such, it may not be considered canon.

Roses speaking with Joseph on the phone

Joseph stays in touch with Roses throughout his journey to relay his situation and ask about Holy's condition. Just before reaching Egypt, Joseph calls Roses from his submarine but Suzi Q answers the phone instead. When Suzi Q asks Joseph what dress she should wear, Roses manages to make her leave the room by telling her to consider her blue dress. After Suzi Q leaves, Roses mentions to Joseph that Holy insists that she only has a cold, but her actual condition is worsening by the day. He asks if they should tell Suzi Q the truth but Joseph denies, saying they shouldn't under any circumstances. Suzi Q then returns and offers Roses tea but he says he should be the one serving her instead.[3]

Later that night, Roses listens to Suzi Q speaking with Jotaro Kujo on the phone. As Suzi Q wonders why Jotaro is traveling with his grandpa, Roses thinks to himself and cries about how the Joestar men are fighting to save Holy.[3] The next day, Roses tells Suzi Q that it's the first time something like this has happened in his thirty years of working for their family, but Suzi Q tells him he's overreacting since it's only a business trip.[4]

Due to the possibility of Joseph not making it in time, leaving only a few days for Suzi Q to see her daughter before her death, Roses decides to tell her the truth to prepare her. Because of Suzi's childish, carefree and curious behavior towards Japan, she disregards what Roses has to say, which eventually leads to her getting in trouble with a yakuza member. Roses saves her in time, causing Suzi to reveal that she already knows about her daughter's condition and he shouldn't have to worry because Joseph always finds a way out of dangerous situations.[2]

There is concept art of Roses, indicating that he was originally set to appear in the game during development.