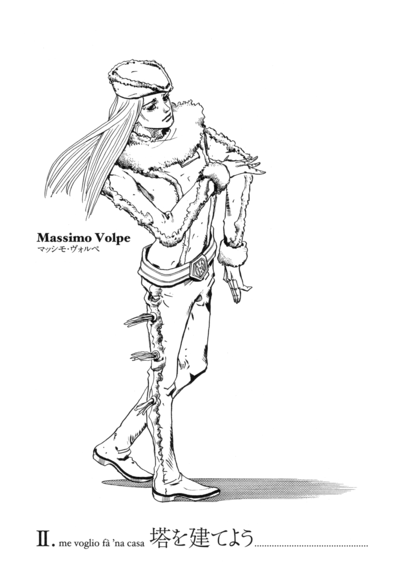 Before his battle and subsequent death against Fugo, the La Squadra Esecuzioni member Illuso had once looked through Fugo's background. It is revealed that Fugo was only admitted to Università di Bologna at the age of thirteen because of sheer bribery. Fugo was born into a family who had earned their fortune before World War II through questionable trades and risky investments in Africa. His father was then married to a daughter of a bankrupt noble for the family title and Pannacotta Fugo was their third son. Growing up, Fugo proved himself to be a genius in his education and was incredibly skilled in every arts and academics. At one point, he questioned the limits to his talents but could not express this sentiment to anybody other than his late grandmother, the only person in the family who spoke to him dearly. On the day she died, Fugo was refused to attend her funeral which prompted him to fail his tests. One of his professors, who confronted him for not taking the subject seriously, ridiculed him for making his grandmother's death as a childish excuse. This caused Fugo to pick up a dictionary and beat the man on the head without remorse. He was subsequently arrested and was soon abandoned and disowned by his family. Fugo was to be sent to a foster home until a gangster named Bruno Bucciarati took interest in him. The two quickly sympathized with each other and Bucciarati decided to invite Fugo to join his team in Passione.

In the present, Fugo and Sheila E await for the reinforcement sent by Mista, a Stand user named Cannolo Murolo who is also the supervisor and the only member in Passione's data analysis team. A banter between Sheila E and Murolo reveals that Sheila was originally an agent between Diavolo's bodyguards and the former assassination team, while Murolo gave intel to the traitor Risotto Nero about Team Bucciarati's whereabouts by reconstructing a photograph of Santa Lucia Station that Bucciarati had burned in Venice. Both of them have been assigned on the mission with Fugo to clear their names. As Murolo lays out all the documents on a table, one of the photographs catches Fugo's eyes as he recognizes the man as Massimo Volpe, an old friend who was in the same class as him in college.

Back in its early days, Passione rose to power by fighting against older mafia gangs. Once Diavolo entered the drug trade, it quickly launched to become one of the most powerful gangs in Italy due to Volpe's Stand Manic Depression, which allowed him to create narcotics. After Diavolo's death, it was discovered that by using Manic Depression to turn salt water or rock salt into drugs, drug production was faster and easier. However, once the Stand's effect expires, the drugs turn back into their original state. Murolo remarks that had Risotto's assassination team succeed in taking over Diavolo's drug business to monopolize the import trade, they would not have known that Passione never imported drugs to begin with. When Sheila E snarls at the mention of the assassination team, she tells Fugo and Murolo that she joined Passione to kill the man named Illuso - the assassin who died to Purple Haze's virus - to take revenge for killing her sister Clara. Giorno later comforted her by saying that Illuso died in the worst way imaginable, and since then she has been owing her life to him. However, Murolo realizes that Sheila E joined the assassin team to betray them and raises his guard around her. Fugo only silently listens to them, knowing that it might have been better for him to not tell her that it was his Stand who had finished Illuso for good.

Fugo attempts to change the subject by asking where Volpe is. Murolo pulls out a deck of cards from his suit and begins to shuffle them. He pretends to perform a magic hat trick and even demands a clap from Sheila E and Fugo, with the latter being the only one participating. The cards form a tower formation, sprout tiny arms and legs, then introduce themselves as Murolo's Stand All Along Watchtower. Presenting themselves as a troupe, the cards actually has the ability to spy on targets, albeit in a circus show act. During its performance, a brawl between the cards broke out due to their positions until the four of hearts card reveal Vladimir Kocaqi and the rest of Sezione Droghe's location in Taormina. Sheila E remarks that because Stands reflect the user's true mind, the cards were also as obsessed with hierarchy as Murolo. Meanwhile, Fugo ponders about Taormina in Sicily.

In Taormina, Volpe interrogates a barely alive Mario Zucchero, who can only make whining noises to answer him, about Pannacotta Fugo. It is revealed that back when he ambushed Team Bucciarati on the boat, he had taken down Narancia and Fugo's Stands first because he saw them as the greatest threats, catching Volpe's attention. Kocaqi mentions that Giorno made a donation in Narancia's name to a church in Naples where his funeral was held, but there were no funerals for Fugo. Volpe is in disbelief that Fugo would ever join the mafia due to Fugo's temper. Angelica pokes fun at him before her mouth suddenly bleeds. Angelica had been born with a blood disease that only Volpe's Manic Depression could slow the progression of the illness. Knowing he is the best for the job, Kocaqi decides to confront and fight Fugo alone while the rest of the team stays behind.

(1st appearance)
All Along Watchtower