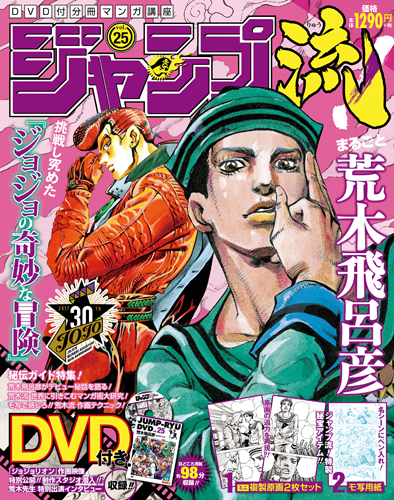 Jump Ryu! (ジャンプ流!, Janpu Ryū!) was a biweekly booklet/DVD series released by Shueisha from January 7, 2016 to December 31, 2016. There are a total of 25 volumes, each of which include both a booklet and a DVD. Each issue focuses exclusively on a single manga creator who currently draws or has drawn for Weekly Shonen Jump or the other Jump magazines.[1]

The booklets include interviews with creators revealing the story behind their debut, reproductions of artwork exclusive to the magazine, and paper that helps readers trace and draw famous scenes from the creators' manga. The packaged DVDs contain behind-the-scenes with manga creators at their workspace, interviews, and offer insight into manga creators' creative process as well as their lives.[2]

Hirohiko Araki was featured in the final volume of Jump Ryu!, which released on December 31, 2016. It features a "Road to Jump" look at his career, a break down of how he created JoJolion Chapter 31, and a 98-minute DVD of the artist at work.[3]