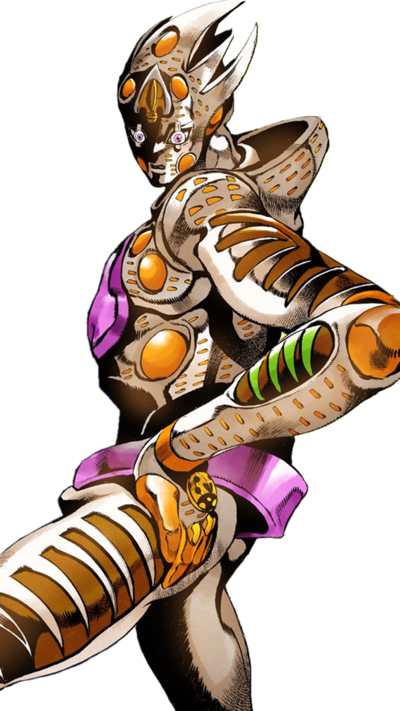 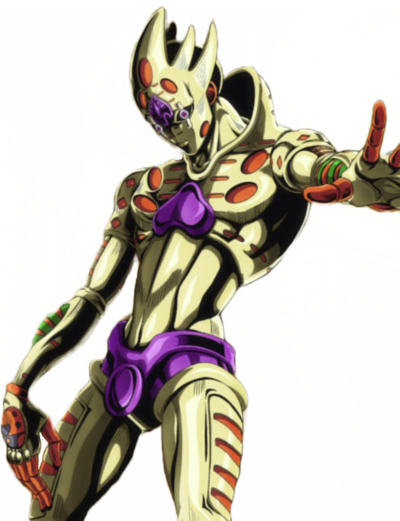 It is a humanoid Stand resembling an evolved Gold Experience and has the ability to turn everything back to "zero". This Stand is the evolved 'Requiem' form of Gold Experience, created when pierced by the Stand-creating Arrow.

Gold Experience Requiem is a humanoid Stand of a height and build similar to Giorno's. Many of its features resemble the original Gold Experience, including the ladybugs on its hands and the oblong grooves across its body. Its head extends into pointed tips with the back of the head hollow, giving it the appearance of a crown or a flower that's grown up and bloomed.[1] Its eyes have a unique design among Stands, with the 'eyeballs' embedded in cross-like structure within slanted sockets. It has an extended ridge collar on the back of its neck and several indentations and various other patterns covering its body.

Gold Experience Requiem possesses a rather mechanical and polite tone, akin to a robot and similar to other Stands capable of speech. It speaks to Diavolo in the erased time normally occupied only by him and his Stand King Crimson, explaining that it is able to operate independently of Giorno's consciousness.[3]

Gold Experience Requiem is aware of the fact that not even Giorno knows what its ability is, and confidently states that no other Stand ability can ever oppose it. The Stand counters the idea of Diavolo's arbitrarily-chosen "reality" (the outcomes of King Crimson's ability) by ominously telling him that he himself will never reach truth at the hands of its own power.[3]

Gold Experience Requiem is capable of flicking a stone fast enough that it ceases to be visible to the human eye, and has enough power behind it to penetrate through a hand and destroy part of a building.[4]

If the opponent is hit as the result of an attack by Gold Experience Requiem, then they will also continuously experience death, as they will die but repeatedly return to point "zero": the point immediately before the process of death (i.e Diavolo's endless death loops). Through this ability, GER creates a new "truth", as it calls it, for Diavolo as a form of poetic justice for the many times the mob boss has manipulated reality to his advantage with King Crimson.[7]

Similarly, Requiem appears to grant Giorno the ability to sense life and lifeforms much in the same vein as the original Gold Experience, but now without the need for direct physical contact. This is demonstrated when he was able to sense Trish's location (in the room of Mr.President), despite standing a fair distance away from Coco Jumbo, and the turtle being outside of his view.[8]