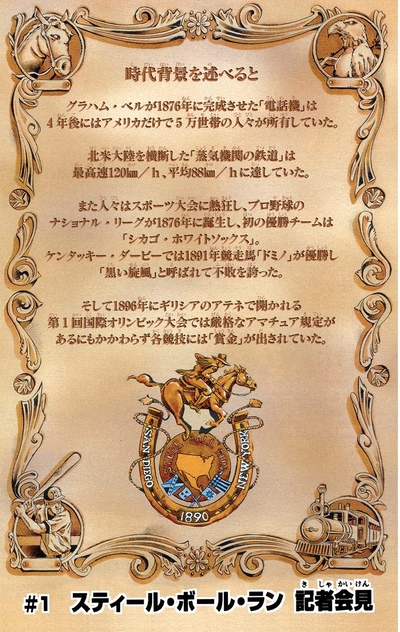 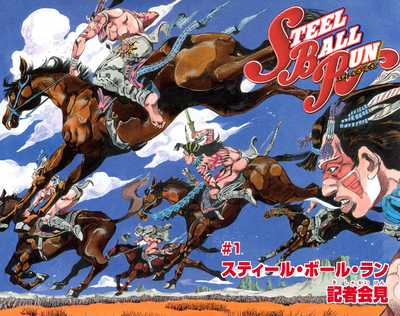 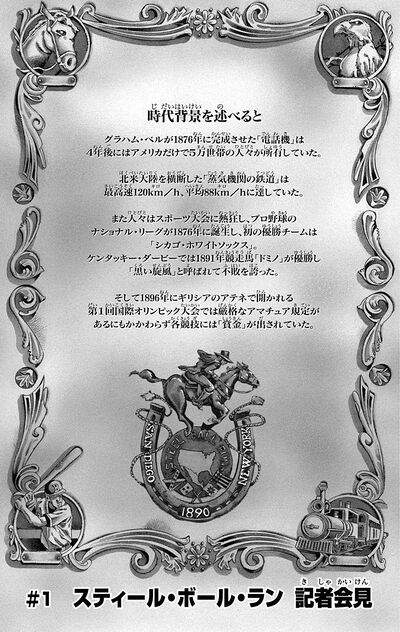 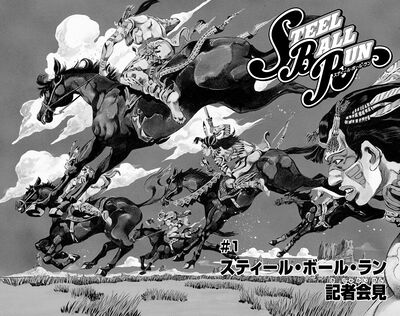 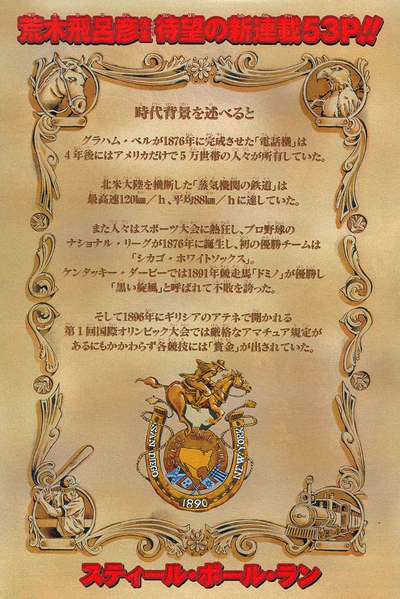 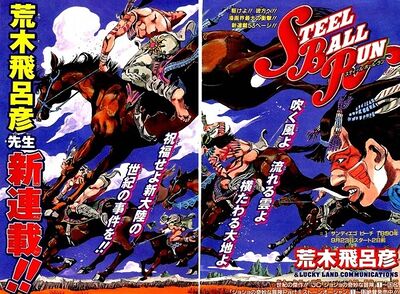 It is the first chapter of the new continuity of JoJo's Bizarre Adventure after the end of the previous continuity that contained Part 1-6. Beginning from this chapter onwards, the story now takes place in an alternate continuity separate from the previous one.

A ruckus is heard in an unnamed native American village, where the chief is informed that the man named Sandman has been keeping English literature with him. This is considered a crime, and Sandman is pursued by his fellow villagers. However, he somehow manages to outrun them on foot while the villagers are riding horses. Sandman then uses a horse to kick himself higher and reach the top of a rocky formation, escaping his pursuers. A mysterious hand materializing out of Sandman's arm is seen blinding a horseman with sand. When Sandman climbs to the top of the rocky mountain, he sees his sister, who beats him and orders him to apologize to the village.

Sandman refuses, explaining that their tribe will have to study their enemy, the White Man, in order to survive. Later, in a conversation with his sister, he indicates a multitude of perfectly hemispherical hand-sized depressions in a rock face. He says that it's evidence of an impossible horseback leap and that the tool they used is likely made by a white man. He then shows his sister a newspaper headline regarding the Steel Ball Run race, with a grand prize of $50,000,000.

Elsewhere, a man reports complications in the logistics of the race to Steven Steel, the promoter of the race; they depict an over-admission of (culturally diverse) entrants. Steel rudely tells the assistant off, ordering him to stop any disorder, and failing that, throw any troublemaker out of the race. When the assistant leaves, Steven jumps into the arms of his young wife Lucy, expressing his doubts about whether he can handle the race, but Lucy reassures him.

Later, Steven holds a press conference. Given the race's rules, he explains that the Steel Ball Run race will start on the Pacific San Diego beach at 10 a.m. on September 25, 1890. The goal is New York, at a distance of ~6000 km. First place will receive $50,000,000; second will receive $1,000,000; third will receive $500,000; fourth will receive $250,000; fifth will receive $120,000; and so on, up to 10th place, along with special checkpoint prizes. The only condition for participants is an age of over 16 years and a participation fee of $1200. Projecting a race time of 60 – 80 days, Steven mentions the rule that changing horses is not allowed. Weapons are allowed, but not crime. Steven names Mountain Tim, Urmd Avdul, Dot Han, and Diego Brando as among the most famous entrants. Finally, he rejects a question about his wife Lucy, who's suggested to be 14 years of age.

Author's Note
“
JoJo's Bizarre Adventure is entering into a parallel world. And by that I mean it's no longer JoJo, it's Steel Ball Run.
”
—Hirohiko Araki
“
ジョジョの奇妙な冒険ワールドに突入した。そしてジョジョでなくなったっていう事で
”
—Hirohiko Araki
Author's Note
“
About the units of measurement and currencies employed in Steel Ball Run
As you know, in the United States, lengths are expressed in feet and inches, and distances are expressed in miles, rods or yards. In order to make the story immediately comprehensible to the Japanese readers, weights will be expressed in kilograms and not pounds. The currency is the dollar, but its value is brought to its current value. In fact, the average salary of a worker in 1890 was closer to one dollar than 1,200 dollars, but a 10,000 dollar prize would have looked ridiculous. In short, these 50,000,000 dollars shown in this story correspond to six billions yen or 40 millions euros from today.
”
—Hirohiko Araki, SBR Chapter 1 tailpiece