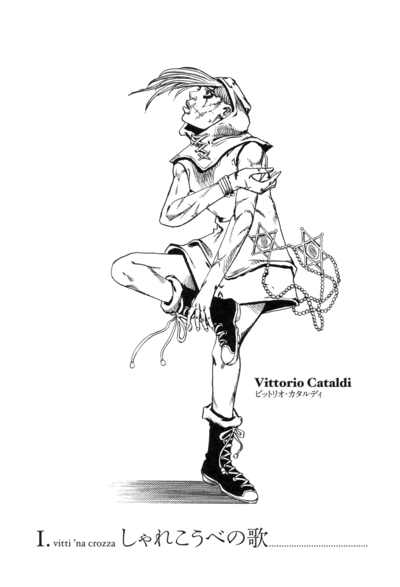 Somewhere in the Temple of Apollo during a new moon, a man interrogates an unknown woman, asking her to call Pannacotta Fugo over to save her. She refuses and groans until the man, who wields the Stand Manic Depression, slides his fingers into her throat, making her screams echo in the darkness.

The story rewinds to before that moment, beginning in the Stadio Giuseppe Meazza soccer stadium in Milan, six months after the events of Vento Aureo. With the stadium deserted and a Speedwagon Foundation blimp flying overhead, Guido Mista meets up with Pannacotta Fugo. He is escorted by Sheila E, one of Giorno Giovanna's personal bodyguards. Mista keeps his gun pointed at him and remarks about Fugo's whereabouts for the past few months, adding that he never knew he played the piano. Grief-stricken, Fugo asks about Bucciarati's death. After commanding Sheila E to cover her ears, Mista answers him by telling him about Abbacchio and Narancia's death, quoting Fugo's words to Bucciarati during their betrayal to Passione - "nobody can survive in this world on ideals alone" and "no one can live without the gang."

Fugo then asks about the rumors that the Passione boss had finally revealed his true identity. According to the rumors, the boss had always been the sixteen-year-old Giorno Giovanna, not Diavolo, who kept his identity a secret because of his age. An attempt to uncover his identity by traitors nearly led to a gang war that got a girl caught up with it. However, both Fugo and Mista know the real truth. They discuss about Giorno's journey prior to his rise in the ranks as well as his new consigliere Jean Pierre Polnareff.

Fugo wonders why Mista is easily sharing these confidential information to him and why he was summoned over a stadium while the Speedwagon Foundation watches in the sky with such urgency. Mista asks him if he considers himself a traitor and tells him to summon his Purple Haze. Fugo realizes that Passione wants to form an alliance with him to use Purple Haze's dangerous ability to spread his virus and to reclaim Giorno's trust for him. After putting the Stand away, Mista begins telling him about his task to take down the remaining narcotics team, Sezione Droghe, from the old Passione with the company of Sheila E.

Meanwhile, in a warehouse at Villa San Giovanni, Strait of Messina, the masochistic Vittorio Cataldi slices his own flesh as Sale, a former member of Passione, watches him. When Sale does not laugh at Vittorio's jokes, he challenges him to summon his Stand Kraftwerk. Terrified, Sale wonders how Vittorio is a part of the former narcotics team that everyone dreamed of joining and had once turned in an eleven figure profit. Nearby, the young Angelica Attanasio, user of Nightbird Flying, sluggishly sings the Sicilian song Vitti 'na crozza. Sale suddenly feels dizzy and loses his ability to make rational decisions, not knowing he is being affected by Nightbird Flying. He takes the challenge and slams his fist into Vittorio's chest, fixing his heart in place. Suddenly, Vittorio's foot raises up and sends Sale flying. When he looks up, he notices someone's heart fixed in space and realizes that his attack was reflected on him. He instantly dies on the ground.

Struggling in pain, Vittorio calls out for Massimo Volpe, later revealed to be the man on top of Giorno Giovanna's hit list. Volpe reminds him that his Dolly Dagger can only reflect seventy percent of damage. Volpe pounds on Vittorio's chest which heals him, but the impact knocks him down. Angelica points at the plastic sheet that Volpe was holding and realizes that it is Zucchero, Sale's partner, who had used his Stand Soft Machine to deflate himself and get close to the narcotics team. Vittorio stomps on Zucchero on the ground who could no longer properly function due to Volpe's mysterious Stand ability.

The leader Vladimir Kocaqi enters the room and scolds Volpe for fighting and tells him that he should leave the battles to the rest of the team. Kocaqi reminds him that he is the heart of the team and that he could rule the world with his Stand, Manic Depression. Volpe only retorts that Kocaqi could also do it with his Rainy Day Dream Away, while Vittorio jokingly asks if his Dolly Dagger is also as good as theirs.

(Mentioned only)
Rainy Day Dream Away