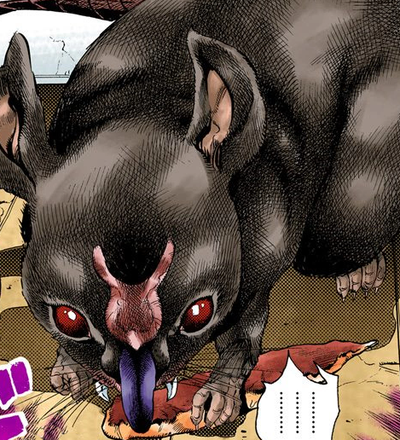 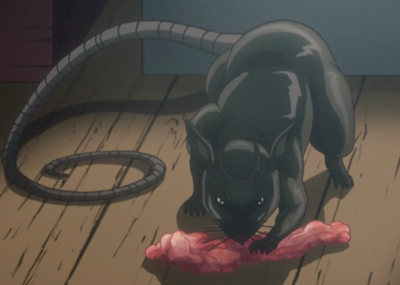 Bled to death after getting shot by Josuke Higashikata

Diamond Records
“
That rat's Stand disfigured the owners of the house, and then it stuffed them into the refrigerator to keep them from rotting. And the rat is feeding off of them!
”
—Josuke Higashikata, Chapter 326: Let's Go Hunting!, Part 2

Not Bug-Eaten (虫喰いでない, Mushikuidenai) is a tertiary antagonist featured in the fourth part of JoJo's Bizarre Adventure, Diamond is Unbreakable, specifically in the "Let's Go Hunting!" story arc.

It and another rat were struck by Akira Otoishi with an Arrow, giving both of them identical Stands, both called Ratt. 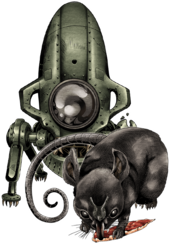 Not Bug-Eaten highly resembles Bug-Eaten. However, it appears to have smaller fangs, and a darker brown fur. Also, unlike Bug-Eaten, neither of its ears seem chewed off.

Both rats also sport a strange, ogival-shaped, protuberance on their foreheads. However, the horns on Not Bug Eaten are notably shorter than its counterparts. In the TV anime, this distinction is omitted with the protuberance looking virtually identical for both rats.

Not much can be determined about Not Bug-Eaten's personality. However, like Bug-Eaten, Not Bug-Eaten also displays hunger towards humans, fueled by confidence after having acquired a Stand.

Ratt is a rifle like Stand enabling Not Bug-Eaten to shoot corrosive darts which can melt anything they touch. Even if it's a Stand that touches it, its user's corresponding part will melt.

While Akira Otoishi had Keicho Nijimura's Arrow in his possession, he tested its powers by using it on two rats living in the farmlands surrounding Morioh. The arrow pierced the rats, granting them both the Stand Ratt. Thanks to their power, the pair of rats took dominance among the local rat population, melding their rival rodents together.

Not Bug-Eaten and Bug-Eaten find and attack a couple of old farmers, melding their flesh together and stuffing them in the fridge for preservation. They also make a nest in a drainage pipe.

When Josuke investigates a couple's house, he is horrified to find Not Bug-Eaten eating melted flesh of the couple in the fridge beside it. Josuke manages to use Crazy Diamond to fire a steel marble at its side, but it doesn't die. Wounded and surprised, the rat runs and hides behind a chair, revealing its Stand. Josuke quickly manages to determine by the Stand's shape that it's a turret-like Stand that shoots, and reacts quickly by shooting another steel marble at the rat; the Stand shoots a dart back, which Josuke barely manages to block in time with a frying pan. Not Bug-Eaten then emerges from its hiding spot, but faints as it bled to death.[2]

Josuke thinks that he's taken care of the situation when Jotaro informs him that there are two rat Stand users, and that Josuke only killed one.[2]

Not Bug-Eaten appears in Diamond Records as an assist character in both the Action Battle and Tactical Battle game modes. It has one 'Unity' type 4 star assist statue. Like all assist characters, when the active assists link together, its assist ability may provide extra effects (Action Battle mode only). It also appears as a boss character in stages, alongside Bug-Eaten.
Moveset

Not Bug-Eaten and Bug-Eaten were written into the story because Hirohiko Araki wanted to draw the suspense of hunting rats.[3]