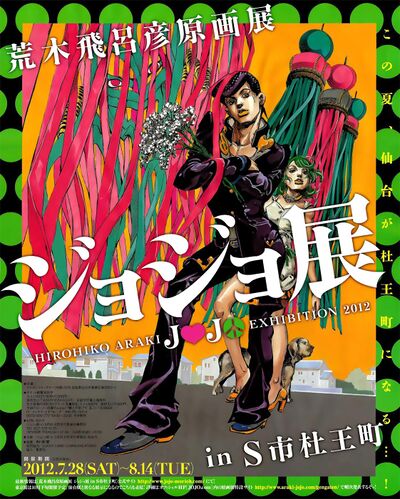 After the initial showing, the exhibition reopened at the Mori Arts Center Gallery in Tokyo from October 6 to November 4.

The exhibition included several original illustrations from the series and was live-streamed through the internet in an augmented first-person perspective. Araki designed a new Stand named Remote Romance, with the ability to project live-streams of distant locations; as a way to explain how people might see it from an in-universe perspective.

In the press conference of this event held on July 5, a new PS3 game and anime adaptation were revealed.

Along with the exhibition, the catalog HIROHIKO ARAKI WORKS was released with over 500 illustrations that were in the event.

The exhibition itself is organised in chronological order and roughly split between the parts of the JoJo's Bizarre Adventure series, with each room corresponding to one part. However, some of the rooms are focused on specific aspect of Hirohiko Araki's career. Each part room displays artwork and original pages from the part, as well as an exclusive commemorative artwork featuring the protagonists of each part. The rooms are also decorated with props relevant to the series.[2]

The first room is focused on the years 1982-1983 of Araki's career and features artwork from the Cool Shock B.T., Baoh the Visitor and Gorgeous Irene series. The visitors then can enter a room dedicated to Phantom Blood; it notably feature a human-sized tankobon of the first volume, and the floor copies Will Anthonio Zeppeli's hat's diamond motif. The visitor can see a replica of the Stone Mask and Luck and Pluck. The visitors then enter a room dedicated to Battle Tendency. The room have a life-sized figure of a slumbering Santana, a replica of the Super Aja. At the center of the room, the visitors can walk under a special projector displaying a flooded pavement; if the visitors walk under it, they can create Ripples in the water. The next room is dedicated to Stardust Crusaders. The visitors can see life-sized figures of Jotaro Kujo and Dio Brando, tablets are available and show invisible Star Platinum and The World trading blows.

In the fifth room, dedicated to Diamond is Unbreakable, the visitors are greeted by a life-sized figure of Josuke Higashikata. The center of the room is occupied by a map of Morioh under a replica of the Bow and Arrow. If the visitors aim special tablets at landmarks, they can look at specific panels of the story. The next room is dedicated to Vento Aureo. The room is decorated with a large prop replicating the arches of the Colosseum. Underneath it, the visitors can see a life-sized figure of Bruno Bucciarati as well as a wall that has been zipped open and through which the visitors can pass. They can also see life-sized carboard cutout of other characters. In the Stone Ocean room, a cutout of Jolyne is ironically put behind bars, and some of the artwork is placed behind a wired fence. The visitor can see Savage Garden near the ceiling, and the marionnette Charlotte.

Another room is used as a transition between the two continuites of the series. It displays reproduction of Rohan Kishibe and Hirohiko Araki's desks, as well as crossover artworks unrelated to the JoJo's Bizarre Adventure series. The visitors can look at a a life-sized figure of Rohan Kishibe in the room as well.

A last room is equipped with cameras and projectors displaying panels from the manga, and where the visitors can amuse themselves posing in front of the camera and be included in the panels.

Author's Note
“
The manuscript of a manga is something that is printed, made into a book, and then delivered to the readers for them to appraise. In the printing process, lines sometimes get blurred, other times they're printed too fine, or the printing paper and manuscript paper differ, or if a part that was colored orange somehow comes out red. Even if I put in a request to print it as close to the manuscript as possible, there are limits to what they can do. This is the fate, and rule, of manga manuscripts. (On occasion, lines that got blurred during printing actually created a neat effect.) Some may think that a pro should take the printing process into account when drawing the manuscript, but I wonder if other mangaka have the luxury of doing such a thing. At the very least, I don't. I consider it a rule to treat a manuscript as a manuscript, and a book as a book when I draw.

Regardless, these manuscripts are typically stored in my file book, which is put away in a cabinet. But I'm very happy that for this occasion, they return to the open air and light of day, as if awakening from a years-long sleep, in the form of this original art exhibition for you to enjoy. It also feels like a grandiose feat to me. But, I'm sincerely thankful to the fans, who have read JoJo's Bizarre Adventure for 25 years, for giving me this opportunity.

You may try to find the differences between the originals and the printed versions as you read this book, or recall the feel of the original art once you return home. At any rate, nothing would make me happier than if you enjoyed your time here.
”
—Hirohiko Araki, HIROHIKO ARAKI WORKS
“
マンガ原稿は、印刷されて、本になって、読者の目の前に届き、そして評価されるものです。