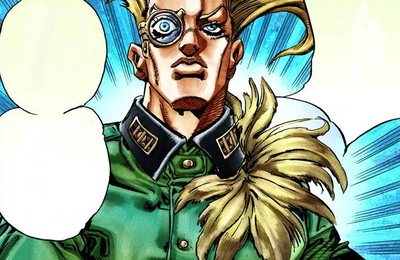 Stroheim is a racer competing in the Steel Ball Run race who attacks Johnny Joestar and Gyro Zeppeli during the second stage.

Stroheim is a man of average build. His hair is style as a wide flattop with a long, flowing lock of hair on the left side.

Stroheim's attire consists of an overcoat, with a feather-like accessory on his left shoulder, a belt, pants, a pair of riding boots, and a monocle on his right eye.

Stroheim's right forearm and hand are cybernetic, outfitted with a retractable firearm barrel that appears between his index and middle fingers.

The series is known for alternating colors between media, the information presented below may or may not be canon.
Skin(Fair)
Hair(Blonde)
Eyes(Blue)
Outfit
(Dark green overcoat and pants, black collar and cuffs, gray belt and boots, gold accessories, silver cybernetics)

From Stroheim's short appearance, he is shown to be a cold individual. During his confrontation with Gyro and Johnny, he doesn't hesitate to immediately begin shooting at the duo. Stroheim even threatens to shoot Johnny and Valkyrie if Gyro didn't disarm himself.

Stroheim appears to be a competent horse rider, placing seventh during the first stage of the Steel Ball Run race.

Stroheim is first mentioned during the final results of the first stage, placing seventh and earning 20 points.[1]

Stroheim encounters Johnny Joestar and Gyro Zeppeli 25 km from the goal of the second stage, Monument Valley. He transforms his right hand, and shoots Gyro in the abdomen. He continues to fire a barrage of bullet at the pair, causing Gyro and Johnny to ditch their horses. Stroheim fires twice more at Gyro, pinned against a boulder, who winces in pain.

Recognizing Gyro is using the power of the Spin and Steel Balls to harden his skin to deflect the bullets, Stroheim once more fires at Gyro's wrists to disarm him. Failing to do so, Stroheim pulls a revolver out, giving him an ultimatum to drop his Steel Balls, or else he'll shoot Johnny and Valkyrie, believing the bullets will travel faster than Gyro can throw his Steel Balls.

Unbeknownst to Stroheim, Gyro had used the Spin to carve out several stones from the boulder behind him. Gyro releases his Steel Balls, firing a barrage of projectiles at Stroheim, who is unable to react in time and is defeated.[2]