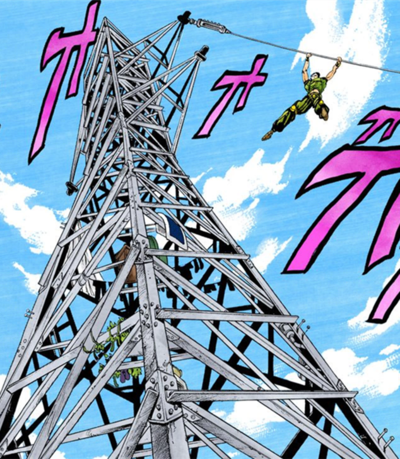 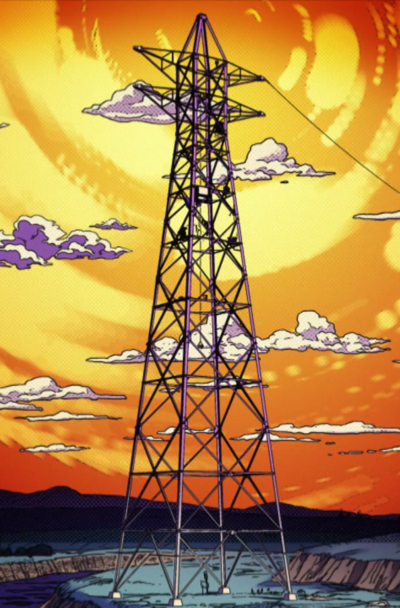 Destructive Power
E
Speed
E
Range
∅
Stamina
A
Precision
E
Developmental Potential
E
A
B
C
D
E
A: Very Good
B: Good
C: Average
D: Poor
E: Very Poor
“
Once you enter this tower, unless someone takes your place, you're stuck here forever! And should you try to leave... Then you become part of the tower itself! That's the power of my Stand, Super Fly!
”
—Toyohiro Kanedaichi, Chapter 399: Let's Live on a Transmission Tower, Part 2

Super Fly (スーパーフライ, Sūpāfurai) is the Stand of Toyohiro Kanedaichi featured in the fourth part of the JoJo's Bizarre Adventure series, Diamond is Unbreakable.

Bound to a transmission tower, Super Fly acts automatically to trap one person inside of the tower and reflects attacks back to any aggressor.

Super Fly is a Stand automatically bound to a huge transmission tower, standing 38 meters above the ground. Due to its nature, it is visible to normal people and setup to fit Toyohiro's 'self-sufficient dream homestead'.

Super Fly is bound to a transmission tower, with the ability to trap its user and others, one person at a time. The tower is practically invulnerable with its ability to reflect damage, and as stated by Toyohiro, would still exist even if he was deceased. While it can't be controlled it can used cleverly, as Toyohiro was fully adept to the environment and took advantage of its damage reflection ability.

Super Fly preventing Josuke from leaving by turning him into metal.

If the victim attempts to escape it, he or she will be covered in steel to restrict their movements. It is possible the victim could be perpetually covered if they do not pull themselves back in time and Toyohiro claims that any would-be escapee will be absorbed into the tower.[2]