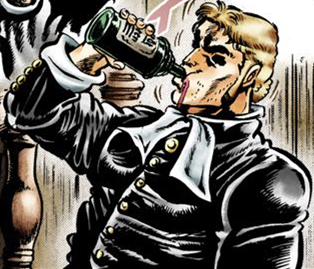 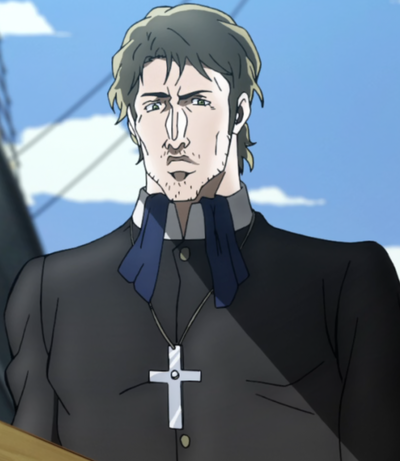 Head obliterated by a metal ball from Dio's coffin

Styx is an alcoholic priest who boards a voyage to Mexico for a mission. While on the ship, he discovers Dio Brando's coffin.

Father Styx is a tall man with an average build. He has wavy neck-length hair with parted bangs and long sideburns. He also has sunken cheeks, a long nose, and a light stubble. He is seen wearing a cassock with a cross necklace.

Styx is an individual who is respected by his fellow priests as they have high hopes for his missionary trip. However, in reality, he doesn't want to travel for them, and seems more motivated by money than spirituality. While he's alone and intoxicated on the ship while drinking, he complains that God often sends him to nasty places, which suggests that he is xenophobic. He doesn't like getting dirty and would have no problem leaving his rosary behind in the cargo hold if it wasn't his precious business tool for making money. Consequently, his motivation for wealth leads to his demise when he closely inspects Dio's coffin, assuming something important would be inside it.[2]

Styx observing the shiny box in front of him

Styx is told by three other priests that his new religious mission is to go a village in Mexico. They wish him good luck in spreading the word of their faith and mention that they have high hopes for him.[2] In the anime, the three priests are shown seeing him off before he leaves.[3] He boards the ship on February 7, 1889, and drinks alcohol until he is intoxicated.

Later, Styx accidentally drops his rosary while drinking and walking around the ship. It falls through a grate, landing in a cargo hold. He contemplates leaving it there but realizes he has no choice but to pick it up since it's his tool of the trade. He heads down to the cargo hold and retrieves his rosary on top of a shiny box. Intrigued, he inspects it assuming that it's a safe, but realizes that it's strangely unlocked. Taking a closer look, he notices that it's actually locked from the inside. Immediately after he realizes this, a metal ball above the lock shoots out from the coffin and obliterates Father Styx's head, making his eyeballs fly out and sending his body flying. Wang Chan opens the box afterward, revealing that it contains Dio Brando's head.[2]

Dio took over Father Styx's body in the secret final battle of the PS2 game because the game producer, Yusuke Sasaki, thought Wang Chan wouldn't be a good final boss if he remained completely accurate to the story. However, he didn't want to completely stray away from JoJo's story, so Araki gave him various ideas.[4] Although the entirety of Styx's canon appearance is preserved in the alternate final chapter of the PS2 game, he is cut from the normal final chapter. 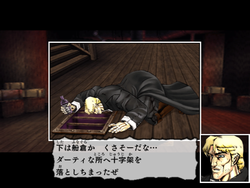 Styx in the PS2 game

Father Styx appears in the secret alternate version of Chapter 23 in the Phantom Blood PS2 game. Like in the original story, Styx accidentally drops his cross into the ship's hold; he discovers Dio's coffin while retrieving it, and comes to the realization that the coffin is locked from the inside. Unlike the original story, however, he is then killed by two blasts of fluid from inside the coffin. Jonathan Joestar soon enters the hold, glimpsing the still-upright priest from behind. Jonathan asks the "priest" where Wang Chan escaped to, only to discover that Dio has taken the priest's body. 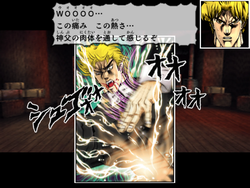 Dio reveals that although he got his current body instantly, it is not suitable for him because he has no respect for it; announcing his intent to steal Jonathan's body, Dio starts his final battle with him. Dio is defensive during the battle, dodging most of Jonathan's attacks and letting his three zombie knights, Winzaleo, Eijkman, and Caineghis, fight instead. He occasionally fires Space Ripper Stingy Eyes and uses his Vaporization Freezing Technique.

After Jonathan defeats him and his zombies, his Ripple flows through Styx's body, destroying it. However, Dio cuts off his head before the Ripple can reach it, thus managing to survive. Wang Chan then reappears to protect Dio; as Erina enters the hold, Dio fires Space Ripper Stingy Eyes at Jonathan, setting the original story's ending in motion.