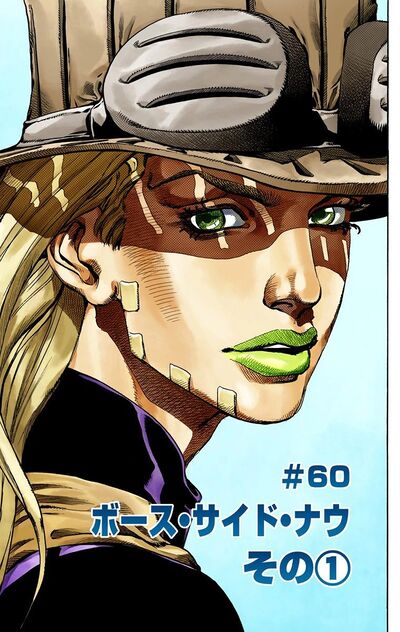 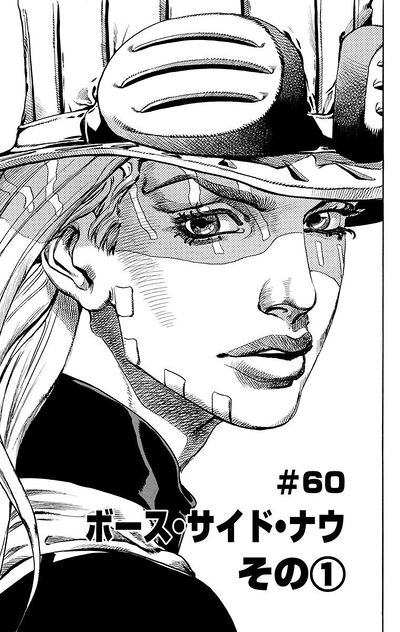 Both Sides Now, Part 1 (ボース・サイド・ナウ その①, Bōsu Saido Nau Sono 1), originally To the Grounds of a Decisive Battle (決戦の地へ, Kessen no Chi e) in the UJ release, is the sixtieth chapter of Steel Ball Run and the eight hundred twelfth chapter of the JoJo's Bizarre Adventure manga.

Gyro and Johnny finish the 7th stage at the 6th and 7th place respectively. While casually taking on other assassins sent by the government, they decide to get the Right Eye from Diego. The 8th stage begins: 140 km from Philadelphia to Pennsylvania.

In his carriage, Steven deduces from a photograph that Lucy has disguised herself as Scarlet Valentine somehow. However Magent Magent shoots him before he can do anything about it. Wekapipo, after having been directed by Gyro to Steven for counsel about finding Lucy, discovers Steven bleeding in the carriage. He is ambushed by Magent Magent but evades the attack. The horses are startled and begin to gallop, taking the carriage with them. Wekapipo and Magent Magent are both on the roof of the carriage, and Wekapipo, having deduced Lucy's identity, decides to kill Magent Magent first.

In the Independence Hall, Valentine is playing the violin while Lucy sings. Lucy then sees the Right Eye she has been keeping rolling toward a nearby room; Valentine hears it but Lucy distracts him at the last moment, knowing that the Corpse must be hidden in the room.