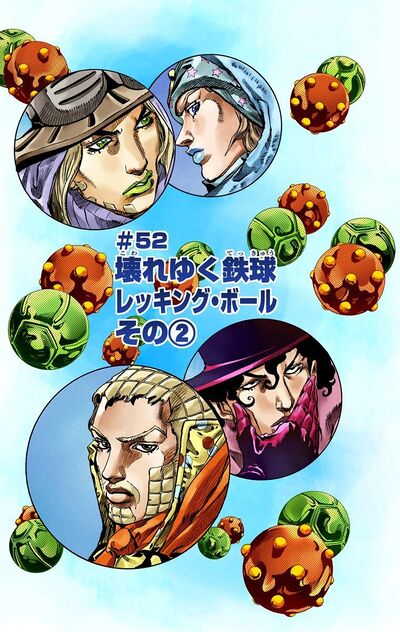 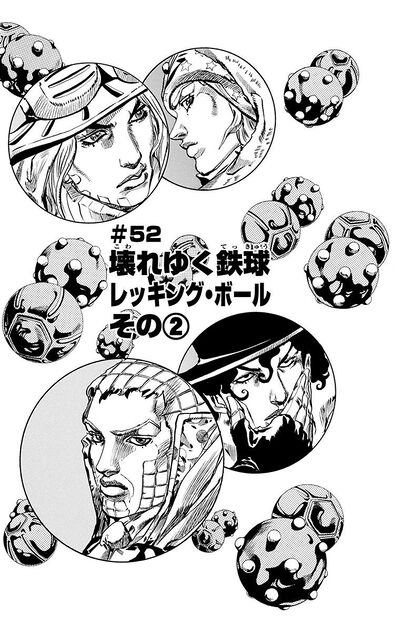 A flashback narrates how Gyro crossed path with an unnamed woman as doctor and patient. Examining the inside of his patient, he saw a lesion in the optic nerves unrelated to her injury, and wanted to operate that lesion with the Steel Balls, against the counsel of his mother. He nonetheless decided to try but a stray vape of steam disturbed his Spin at the last moment.

in the now, Gyro explains to a panicked Johnny that Wekapipo's Wrecking Ball induce left-side ataxia to its victims, thus making their victims unable anything that is "on the left". Turning to the right, Johnny finally sees Magent Magent preparing to shoot them with a rifle and retaliates. However Magent Magent's Stand 20th Century Boy renders him invulnerable as long as he kneels and repels Tusk's nails as well as the Steel Balls without difficulties. Wekapipo, after having been contacted by the lone survivor of the Eleven Men, knows that the Legs are near their position, and suspects the wolf which has been following the duo to be the host. Meanwhile Johnny points out that they don't have any reference for the Golden Rectangle in the frozen straits and Gyro's Spin proves inferiors to the Wrecking Balls without the Golden Scale.