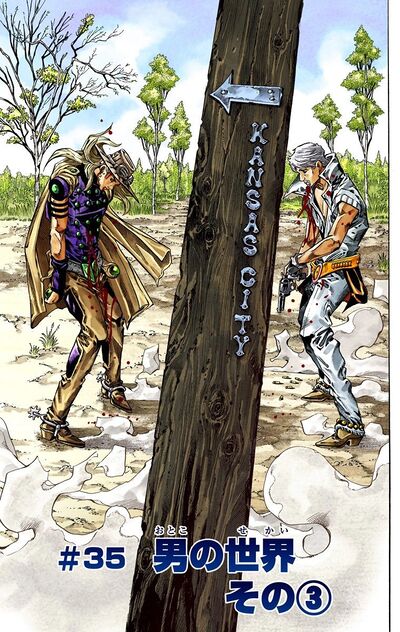 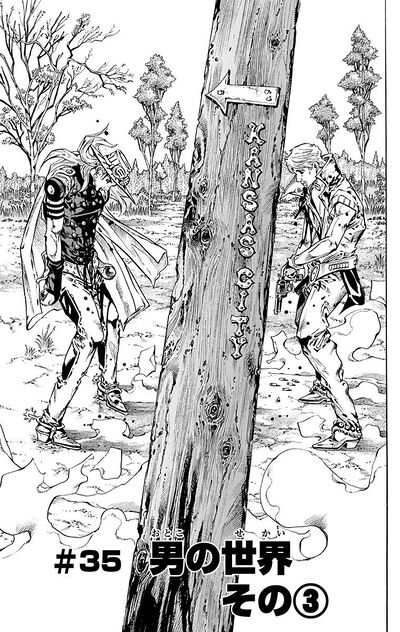 A flashback details the past of Ringo Roadagain.

When he was a child, Ringo had a weak constitution and would cut himself on anything. His family was ostracized by society when Ringo's father deserted the army and was arrested, branding them as "traitors", and thus they lived alone in the woods. One night, when he was ten years old, Ringo woke up to see a soldier having killed his family. As the soldier attempts to rape him, the sickly child stole the soldier's gun and shot him in the mouth, killing him. Cornered, a young Ringo developed the necessary Dark Determination to kill the soldier and survive. Since that night, Ringo was no longer sickly and adopted an antisocial philosophy, believing that a true man does not act in function of others but of his own desires.

In the now, Gyro heads toward Ringo's house and witnesses an apparition of his own father Gregorio Zeppeli, which demands that he should instead return immediately to Naples as his foolish participation in the Steel Ball Run race is fueled by sentimentality. However, Gyro refutes what the apparition says, and affirms his own desire to understand if Marco really deserves to be executed and his desire to see what the Corpse is about. With a renewed determination, Gyro throws a Steel Ball and watch through the walls, seeing that Ringo has also discovered the location of the next Corpse Part. He attacks the gunslinger through the walls, severely hurting him but Ringo manages to rewind time.

Entering the house, Gyro challenges Ringo to another close ranged duel. Gyro then tells Ringo that with his Steel Ball's Scan, he found an old wound in his left clavicle, and warns Ringo that this is his weak point; when damaged, it will paralyze his body and even his heart. The duel sets off and Gyro is shot at the heart, but Ringo is fatally wounded in his left clavicle, forcing him to rewind time. This time, Ringo defensively protects his clavicle with an arm, but the movement deviates his arm and Gyro is merely shot at the shoulder, while a wood splinter impales Ringo from behind into his left clavicle again, due to Gyro's Steel Ball. Ringo acknowledges his loss, and, before being finished off by Gyro, asks him to find "the light" beyond the standards of society, welcoming him to "a real man's world".