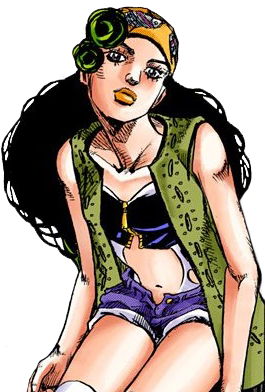 Karera is a student enamored with Josuke Higashikata's former identity and has been embroiled with the Locacaca Smuggling Organization. She is currently in hiding. Karera is a Stand User and can grow hair anywhere thanks to her Love Love Deluxe.

Karera is a young woman of slim build and average height. She has long, dark hair, and her bangs are styled into multiple, large curls, similar to those of Giorno Giovanna. On her head, she wears a fish-print bandana. Her outfit consists of a dark-colored bralette with a zipper in the front, a long vest, and a pair of short shorts. Attaching her shirt and shorts is a pair of suspenders. During her first appearance, she wears a pair of heeled gladiator sandals. Later on, she wears striped thigh-high socks with a pair of ocean-themed heels decorated with stars and seashells.

Karera has a characteristic staggering gait, always looking as if she is going to fall sideways when she walks.

The series is known for alternating colors between media, the information presented below may or may not be canon.
Skin(Fair, orange lipstick.)
Hair(Black, lime curls.)
Eyes(Grey)
Bandana
(Yellow, with grey and purple fish insignias.)
Outfit
(Olive vest over a black bralette with a golden-yellow zipper, blue jean short shorts, periwinkle suspenders.)

Airheaded, whimsical and crude, Karera is an eccentric girl whose presence is grating to everyone around her.

In general, Karera is a jovial yet unpredictable person. She is usually energetic and playful, and at the same time is prone to suddenly change subject and/or mood. Karera is quite clingy and flirty with Josuke, whom she mistakes for being her crush Josefumi.[5] She also claims that she dreams about becoming a fashion designer but has no talent for drawing, so she bought a laptop instead, planning to create her designs with CG software.[6] On the other hand, the subject of the Locacaca and the threat of the Rock Humans makes her nervous as she understands the stakes and danger of it.[7]

Karera has a surprisingly high number of bad habits. Firstly, Karera is a serial conwoman. Exploiting her Stand power, she commits several petty crimes such as scamming a yakitori vendor[8] or taxi driver into giving her money by faking a bad service.[9] She also manages to steal money from a credit card.[10] Secondly, Karera is rather slovenly due to her current living style. For instance, she has no problem leaving a mess behind her after eating or cleaning the space between her toes in public.[11] Karera also regularly causes scandals for her own benefit (acting and speaking vulgarly during such occasions and insulting her interlocutors),[12][13] indulges in pachinko only to lose her money and beg Josuke for more[14] and is near-constantly seen snacking.

She hates to dwell on the past, going so far as to completely avoid associating herself with it, except for her unrequited love for Josefumi Kujo.[15]

Although she is a Stand User, Karera is also no fighter and prefers to flee her enemies,[16] only coming to assist Josuke after leaving for long enough to be forgotten about and make a successful sneak attack.[17]

Karera's Stand Love Love Deluxe gives her control over other people's hair, growing it on their heads and even on other things that they had touched, such as a tsukune

or an ATM's LCD screen.

Not much is known about Karera's youth. It is known that Karera is not keeping contact with her family and is uninterested in doing so, meaning she must have had some bad history with them.

Karera became an agricultural student at TG University, frequenting the same college as Josefumi Kujo.[2][3] Karera had a crush with Josefumi and began to stalk him. Although she has shared a photo with Josefumi and Yoshikage Kira, Karera never formally met them.

On August 19, 2011, Karera was resting at Morioh's harbor, presumably waiting for Josefumi, when Josefumi and Kira were attacked by Tamaki Damo and Yotsuyu Yagiyama. Kira secretly planted Sheer Heart Attack in her hair and lured her into wandering near his boat so that Yotsuyu would approach her. Sheer Heart Attack's explosion created a diversion so Kira and Josefumi could escape; Karera escaped unharmed. However, she had to hide for six months, pursued by the A. Phex Brothers. 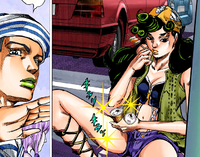 Karera is introduced in the story as a mysterious woman who lures Josuke into a back alley, having mistaken him for Josefumi. She is revealed to have some familiarity with Yoshikage Kira and Josuke's other half. She's eventually convinced that Josuke was the one she mistook him for after he uses his Stand to obtain her name through the card in her back pocket wallet. After the exchange, she borrows money from him and swindles a free meal from a yakitori shop

by producing a hair from a tsukune

Later she and Josuke go to a cafe in downtown Morioh where she shoves various items in a plastic bag, before eating bread with sugar and soy sauce, later offering it to Josuke claiming it tastes like sukiyaki

. After she cleans the spaces in between her toes with a napkin dipped in water, she walks into the bathroom with an old man using her Stand power to grow hair on his head which is interrupted by Josuke, who mistakenly thought she was prostituting herself. She later explains to Josuke that she gets paid growing hair on the heads of men (while they are in her Stand's radius), and replies to Josuke's interrogation of her that she loves him, not caring for her family and that she lives in the present. Immediately after that, she yells at two men for staring at her before leaving the cafe.[18] 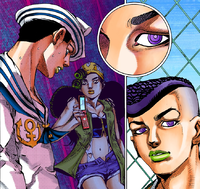 Karera shows a photo of Josefumi

Outside the cafe, Karera shows Josuke a photo of herself standing with Yoshikage Kira and another young man who she calls Josefumi Kujo, allowing Josuke to learn the real name of one of his former halves. She then uses her Stand to steal an ATM card belonging to one of the men she yelled at.[19] She later uses her Stand to get the number of the ATM and steal money to 'treat' Josuke, when in reality she went shopping to buy various items including a computer for her dream as a fashion designer. Karera and Josuke then enter a cab planning on going to Kira's apartment and Josefumi's house, using her Stand in the process to scam the cab driver into a free ride.

Afterward, they walk down the road to Kira's place. Josuke tells her that Kira is dead, causing her to break down under the assumption that he was murdered. She reveals to him that Kira owned a Locacaca Tree in addition of disposing of several more. Then Josuke spots one of the A. Phex Brothers and asks if she knew him, which she denies. Shortly after she is lit aflame by the older brother's ability and extinguished by Soft & Wet before later fleeing.[4]

Soon after, she feels guilty for abandoning Josuke, realizing it was her fault they were attacked and she had involved him. Karera uses her Stand to light the older of the twins on fire and the two are killed quickly afterward. Following their defeat, she tells Josuke that she likes him, and she will be sticking around Morioh for a while longer. She reveals that she can tell he made an "equivalent exchange" with Kira, and then, after mentioning that they will see each other again at some unknown time in the future, she leaves him without another word about the situation.[1]