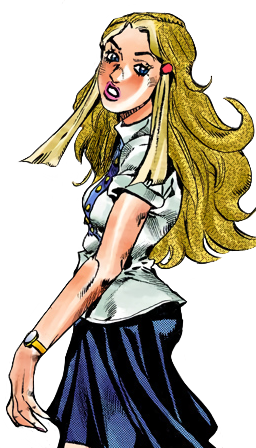 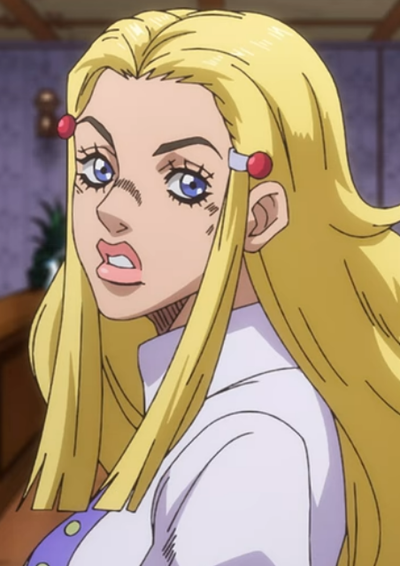 The younger sister of Enrico Pucci and Wes Bluemarine. Perla falls in love with Wes, both unaware that they are related. This relationship drags conflict into their lives, as her eldest brother attempts to split them apart.

Perla is a young girl of slim build, with long hair and two thin braids on each side of her head. She regularly wears a blouse and skirt.

Her hair is two-toned in the manga, with it being lighter at the front. However, this is ignored in the anime adaptation.

Enlarge
Perla telling Pucci that she's in love with someone

Perla Pucci is an average, sweet girl living comfortably with her family. She falls in love with Wes Bluemarine, who unbeknownst to both of them, is actually her lost brother Domenico Pucci. While she is strong-willed and slaps the leader of a Ku Klux Klan mob attacking them, she couldn't bear seeing Wes killed, and throws herself off a cliff into a lake.

Being the youngest and only daughter of the Pucci family, Perla grew into a beautiful girl who one day met a delivery boy named Wes. After Wes stopped a thief from stealing Perla's bag, the two quickly fell in love. However, Perla's brother Enrico soon realized that Wes was actually his thought to be dead twin brother and sought to separate the pair in a manner that would least harm Perla. The "private detective agency" that Enrico used, however, turned out to have affiliations with the KKK. They investigated Wes, discovering that his mother had married an African-American man. Upon seeing Wes and Perla exchange a goodnight kiss, the agency attacked them for having an interracial relationship.

The situation got out of control, leading to Wes being beaten nearly to death and hung from a tree, and with Perla sustaining injuries as well. Perla cut Wes down and, now aware that her brother was responsible for the incident, vowed never to feel again. She then jumped off the nearby cliff, killing herself. Her body was found in the river not long after, and Enrico's desire to preserve her memory resulted in him gaining a Stand. Since then, he kept Perla's Memory DISC with him.[2]