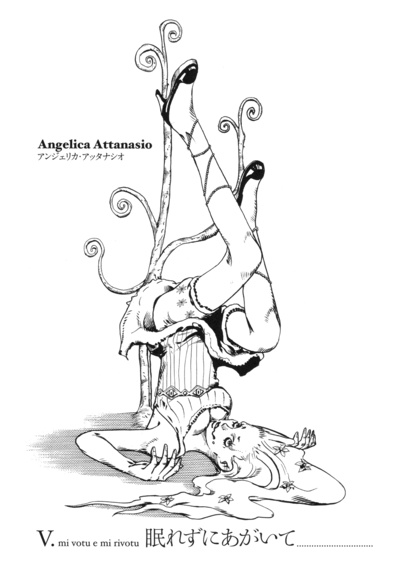 The life of Gianluca Pericolo, an ordinary Passione soldier, is narrated. When he was still a sickly young boy, his life was saved by Passione so his father, Nunzio Pericolo, joined the mafia to repay their debt and later became one of Passione's caporegime. As the son of a former capo, who also aided Bruno Bucciarati in his mission to bodyguard Trish Una and later pulled the trigger on himself to hide the boss' identity, Gianluca followed his father's footsteps and vowed his loyalty to Giorno. Unbeknownst to him and the rest of Passione, the former boss was actually Diavolo and not Giorno Giovanna all along.

In a library at Naples, Gianluca searches for his boss Giorno. He finally finds him at the art history section reading Politicita di Michelangelo and reports to him about Vladimir Kocaqi's death as according to Murolo. Giorno does not give any further instructions, not even to send reinforcements to aid Murolo and the others, which prompts Gianluca to ask if Giorno trusts Fugo. He wonders why the boss assigned him to the find the Sezione Droghe members even though Fugo abandoned his mission to save his life before - the same mission that his father had given his life for. Again, Giorno says nothing other than he understands Gianluca's predicament. When Gianluca suggests letting the Sicilian police look for Volpe, Giorno only replies that the Sezione Droghe team themselves will be the ones to tell where they are located. Meanwhile, learning of Kocaqi's death, Vittorio, Angelica and Volpe spend less time grieving and decide to avenge the old man by finding a Stone Mask in a Nazi bunker, which was advised to Volpe by Kocaqi. Before exiting the hideout, Volpe leaves behind a carnage of the corpses of Sicilian gangsters covering every corner of the room.

Later on, Murolo, Sheila E, and Fugo inspect anything that remains in the now-empty hideout. Murolo deduces that the gangsters were allies of Kocaqi up until his death, causing them to turn on Volpe and the others. Fugo notices a slight change in Sheila E's attitude, thinking it was because of when he accidentally strangled her during their fight against Kocaqi. Murolo leaves the room to summon his Stand and tracks down Volpe in Ortygia, Syracuse. As Murolo calls for a helicopter to fly them to Syracuse, Fugo reminisces about the day Bucciarati and the rest of the team betrayed the Boss, Narancia's decision, and how he chose to stay behind.

On the helicopter flying over the Ionian Sea, Fugo continues to wonder about Narancia's decision to follow Trish and Bucciarati despite being initially unsympathetic with Trish just as Fugo was. He asks Sheila E what she would do if she found herself surrounded by strange men, whereas she bluntly replies that she would only ignore them. Fugo realizes that Trish had been hostile to them beause she was only trying to keep herself safe yet he still remains unconcerned towards her. Sheila E tries to ask Fugo something before stopping herself. Murolo notes the awkward silence, so he pesters the pilot from Passione to lower the helicopter's altitude. Suddenly, their helicopter is attacked by Angelica's Nightbird Flying, which incapacitates them and the pilot, sending their helicopter into the sea.