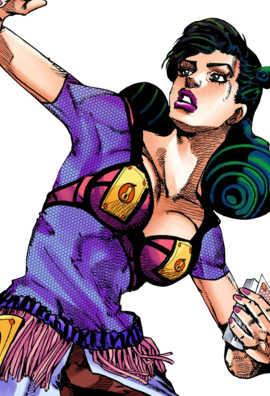 JJL Chapter 55
“
I don't have any regrets, but... That's because I'm going to take back the life I lost.
”
—Kaato Higashikata, JJL Chapter 55: Walking Heart, Breaking Heart

Kaato is a Stand User and uses a yet to be named deck of cards.

She wears a long dress with a layer of fringe along the waist and with playing card back designs with the Higashikata family crest across her chest and on her hips. She also wears large rectangular bracelets on both of her wrists.

Kaato is a very mysterious individual, showing different sides of herself depending on whom she's speaking with. She seems to act the most genuine around her son, Jobin Higashikata, whom she has a special connection with. Since he was a boy, Kaato doted on Jobin and would take special care to make sure he was always alright.[2]

Kaato herself acts incredibly loving towards her children and claims to never have stopped thinking about them during her 15 years in prison. However, she is not above violently attacking them if she is disrespected, as shown when Joshu intentionally tripped her with a chair and she relatiated by making a chair appear and stab him in the chin.[3] Kaato states that all human are born unequal, and that everyone tries to climb to find happiness. She pushed Jobin into committing to ambition to make him climb "higher".[4] For that she was ready to sacrifice one of Jobin's bullies to cure him from the Rock Disease. Another reason for her act is that she wished to decide her fate for herself, seemingly disapproving of being de facto the one who would sacrifice herself for Jobin's sake.[5]

Despite her horrific crime the prison community loved her and genuinely missed seeing her leave.[6] While relaxed, she tends to speak like Hato; elongating certain syllables.[7]

When Kaato steps out of prison, she is revealed to be determined in being granted her due "reward" for sacrificing 15 years of her life for the family.[8] Thus, she demands that Norisuke gives her half of his fortune for the divorce (claiming that half of the Higashikata House is hers[9]), and she also wants to spend more time with her children. On a more humorous note, she is also seen "breaking" into the property and treat it as if she still belonged her, watching the TV in the living room[10] or sunbathing in the garden with some champagne.[11]

Kaato's Stand appears to take the form of a simple deck of playing cards. However, by placing objects between the cards, she can store that object in the deck itself as if nothing was there. Once stored, if a card containing the object is flipped over the object will emerge.

The size limit of objects Kaato can store within her cards is unknown, though she was able to keep a full-sized dining room chair within them. 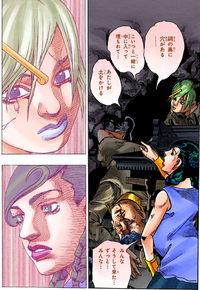 , much to his surprise. He commands her to leave immediately while she states calmly that half of the house, and Norisuke's assets, still belong to her. After Norisuke storms off, Kaato calls Jobin on her phone, telling him that she suspects Norisuke is plotting something. She also informs Jobin of Josuke's interloping, correctly assuming that he's also working against them.

As the Higashikata residence is caught up in Wonder of U's calamities, Yasuho sees Kaato strangely appear in the house after Tooru is hit by Josuke's profound invisible bubbles.