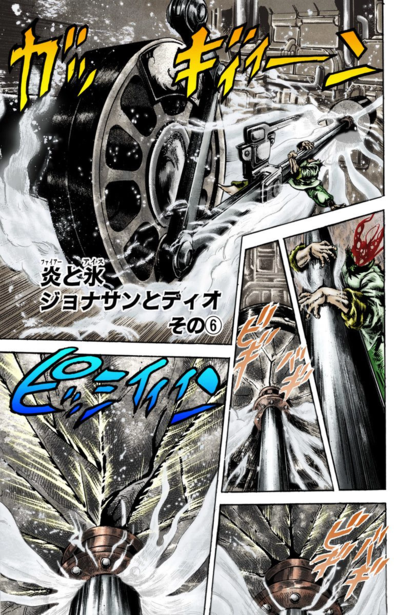 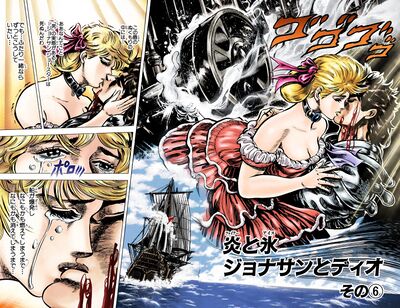 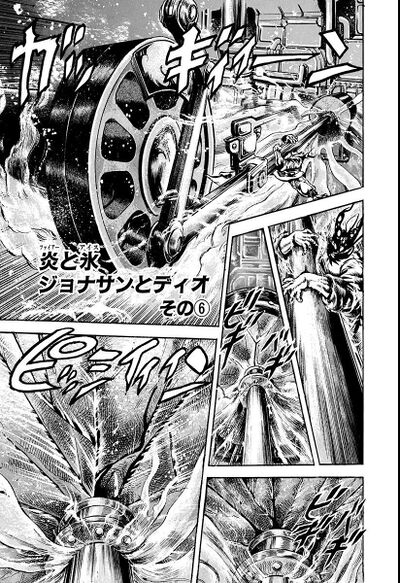 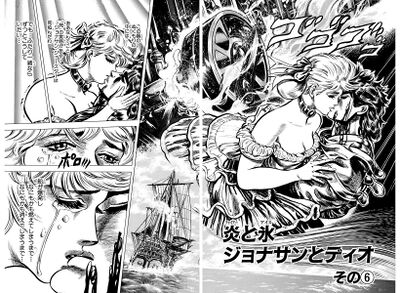 Fire and Ice, Jonathan and Dio, Part 6 (と ジョナサンとディオ その⑥, Faiā to Aisu Jonasan to Dio Sono 6), originally Into Oblivion (忘却の彼方へ, Bōkyaku no Kanata e) in the WSJ and tankobon releases, is the forty-fourth and final chapter of Phantom Blood and the forty-fourth chapter of the JoJo's Bizarre Adventure manga.

Thinking that the both of them will die on the sinking ship, Erina shares one last passionate kiss with her husband Jonathan. However, as she finishes, Jonathan points to a baby nearby whose mother had been killed by the zombies, and tells Erina to live on. Erina objects, but Jonathan tells her that he is asking her to do it because his own mother died in the same way as this unknown woman: protecting her child.

Dio's head clings to a pipe overhead by his hair. He commands the other zombies to devour Wang Chan's body in an attempt to prevent the explosion; however, before they can even begin to, the engine explodes. Shrapnel showers and pierces Jonathan's back as he shields Erina and the baby.

Dio then quickly attempts to sever Jonathan's head and take his body. He explains his contingency plan is to then hide in his coffin, built to withstand even the blast of a ton of dynamite, and wait until an opportune time to come out. He wraps his blood vessels around Jonathan's neck and prepares to attack.

Jonathan prevents Dio's assault by removing a piece of the shrapnel from his back and stabbing it into Dio's head. Jonathan then embraces Dio's head so that it can no longer move and reflects on their history together and how their fates had been forever intertwined. He then speaks his last words to Erina, telling her to be happy. Dio tries to bargain with the dying Jonathan saying that he can still live on for eternity with Erina and be happy, but his spirit had already passed on, much to the shock of Dio.

Erina and the orphaned baby are the sole survivors of the exploding ship after they escape in Dio's coffin. As the coffin drifts at sea, she reflects that Jonathan's heroism shall never be recounted in history, but his descendants will be told. Though she didn't know it at the time Erina was pregnant with their child. After two days, Erina and the baby are rescued from the waters near the Canary Islands.