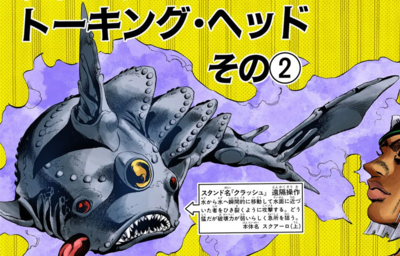 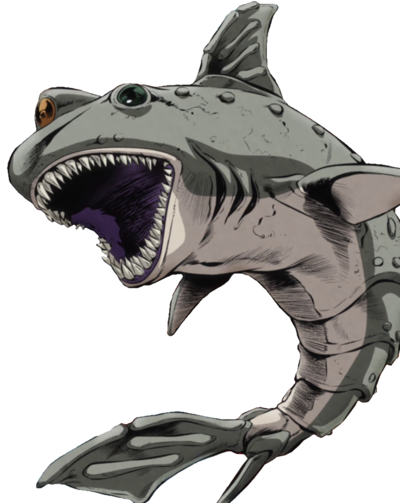 Clash (クラッシュ, Kurasshu) is the Stand of Squalo, featured in the fifth part of the JoJo's Bizarre Adventure series, Vento Aureo.

Taking a form similar to a shark, it can teleport between bodies of water or other liquids in order to attack quickly and viciously; it can also grow or shrink to suit its current environment.

Its design is based on ancient, armor-plated fish[1], most likely those of the class Placodermi and more specifically the fish Dunkleosteus.

However, it can instantly teleport into any body of liquid of a minimal size near the one it is occupying at the moment.[2] Liquids it has occupied include hot soup, wine,[2] fresh or sea water, and even someone's tears.[3] Clash can also sink inside and emerge out bodies of liquid as if they have depth despite being extremely shallow, as well as take anything or anyone along with it when transferring between liquids. Thus it could drag Giorno away through a puddle of water from a leaking pipe.[4]

However it cannot teleport into sealed bodies of liquid[5] or teleport more than 2 or 3 meters away from its current position according to Narancia.[6] Moreover the warping process can become slower if Clash is hurt.[6]

It also takes a practical size depending on the liquid that it occupies:[5] when in a wine glass, it is about the size of a small fish,[2] but appears to be larger than a canoe when swimming in one of Venice's canals.[3] It seems to be dependent on how much surface the water is covering, as Clash can appear as big as a cat when inside a shallow puddle.[4]

A 3D model for Clash is present in GioGio's Bizarre Adventure, however, it ultimately went unused.