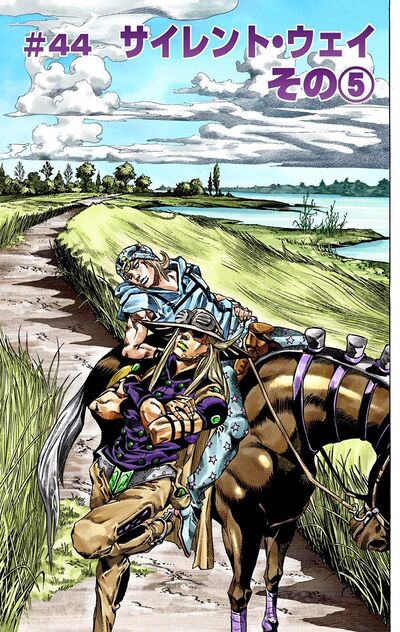 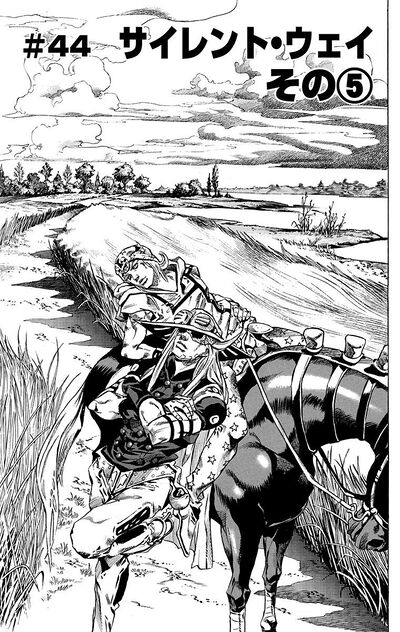 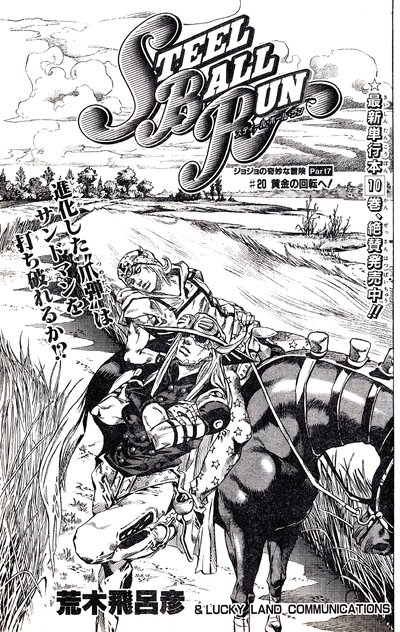 Tusk ACT2 is the next level of Johnny's Stand. Using the finger as an axis to turn the nail around like a drill in accord with the Golden Rectangle, they have considerably more power. Johnny shoots one nail at the water, causing a whirlpool sucking in the sounds; however Johnny sees that his nail doesn't grow back. He then shoots at the shores, the nail revealing Sandman near a tree and shoots another time. However Sandman shields himself with a sound, rebounding the nail into the tree. Despite another two shots, the shield is impenetrable by the nails, and Johnny falls into despair again, as his power seemingly cannot prevail against Sandman's In a Silent Way. However the holes the nails produced begin to move by themselves, destroying the homonculi and seeking Sandman automatically, urging the Indian to move away. Johnny confirms this with another nail shot at a homonculus, and gains confidence. Sandman directly confronts Johnny, telling him that his true name is Soundman, and that the white men deformed his name. He also explains that he will directly stab him with his dagger, being at a disadvantage at long range. Johnny only has two nails. Soundman then leaps at Johnny, who shoots one nails, but Soundman successfully blocks it for several second until the hole disappears. Having worked out the weaknesses of Tusk ACT2, Soundman leaps at Johnny with his shield, yet Johnny misses him on purpose, hitting a butterfly which lands on his shoulder. The hole moves toward the Indian's heart but Soundman sacrifices his hand to save himself, and is now before a nail-less Johnny. However Johnny has sculpted an iron ball out of Gyro's buckle, and warns Soundman to get away. The two Stand User clash, Johnny shooting Soundman in the throat, killing him. Johnny then drags Gyro to the shores of the Mississippi, and is confronted by Hot Pants, who tells Johnny that their horses have already crossed it. Johnny sees the symbol of Naples on one of Hot Pants' sack but she hits his neck before he can do anything, rendering him unconscious and stealing all the Corpse Parts save a part of the Spine, crying in joy at their view. Johnny wakes up some time later, he and Gyro having been healed and having crossed the Mississippi on a raft thanks to Hot Pants.

(Death)
In a Silent Way