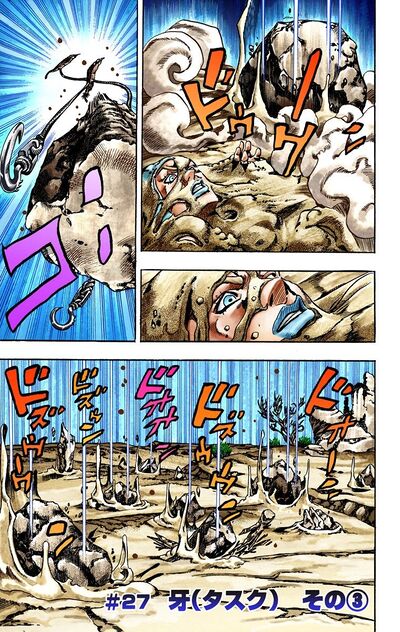 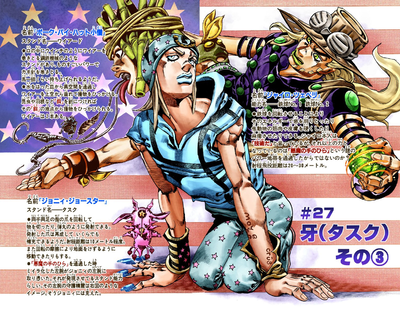 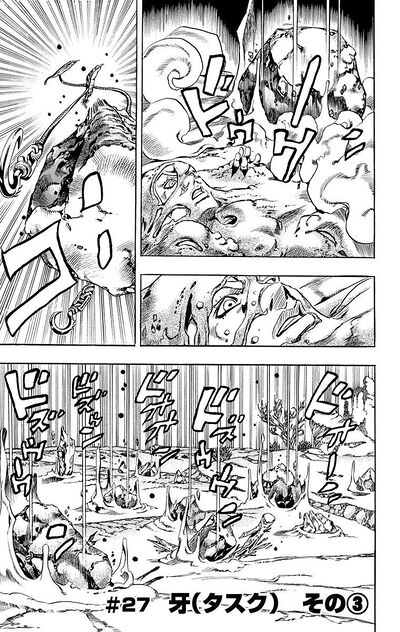 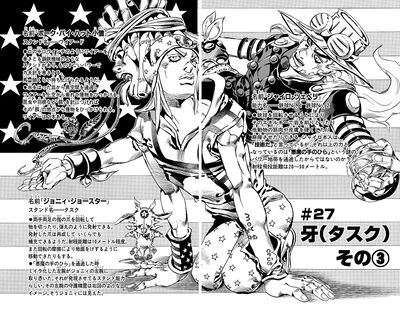 In an attempt to force Johnny to reveal himself, the Pork Pie Hat Kid bombards the plain with rocks, but narrowly misses him. As he approaches Gyro's location, Johnny then sees that Slow Dancer has reappeared, the enemy deciding to use the horse's natural attraction to its owner to know the general location of the ex-jockey. Dozing the area with gas and igniting it, the Pork Pie Hat Kid finally sees the burning silhouette of Johnny along the flames and rips it apart with Wired's hooks. This however was merely a statue Johnny carved out of a tree trunk with his Stand Tusk; his enemy now defenseless as the hooks are far away, Johnny shoots again into the feather portals, hitting the Pork Pie Hat Kid directly in the face and seemingly defeating him.

When Johnny reaches Gyro's location, hooks suddenly come out of the Neapolitan, incapacitating Johnny; the Pork Pie Hat Kid merely faked being dead. Unable to retaliate, Johnny faces a dilemma, giving the Corpse Part which made his legs work briefly, or die with Gyro. In tears, Johnny relinquishes the Left Arm, and at the same time, his Tusk. The triumphant Pork Pie Hat Kid departs, planning to kill the duo anyway, but Gyro has made the Left Arm's nails spin unbeknownst to him; when he examines the Arm, the nails are shot directly at his face, severely injuring him.

Later, Gyro examines the Left Arm with an anxious Johnny; Gyro decides to give it back, being ultimately uninterested in them as he entered the Steel Ball Run race for Marco. When Johnny asks why would people kill for these Corpse Parts, Gyro theorizes that the Corpse may be the corpse of a Saint, someone whose relics are able to perform miracle and bless whole countries, making them prosper. Johnny and Gyro seal their friendship and agree to stick to each other during the race, as they see Diego and Sandman rushing toward the end line.