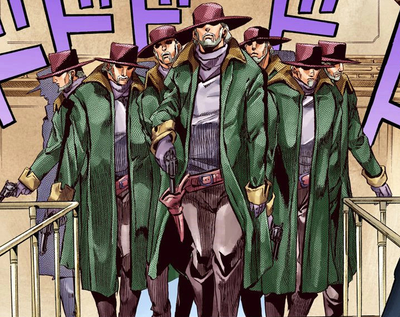 Shot to death in a bar fight

The Eleven Men (１１人の男たち, Jūichi-nin no Otoko-tachi) are a group of unnamed tertiary antagonists featured in the seventh part of JoJo's Bizarre Adventure, Steel Ball Run, specifically in the The Promised Land: Sugar Mountain story arc.

As Funny Valentine's henchmen, they track down Johnny Joestar and Gyro Zeppeli during the sixth stage of the Steel Ball Run to take their Saint's Corpse parts. They are all Stand Users that share the same Stand, Tatoo You!

All eleven men share similar outfits consisting of a flat brim cowboy hat, a range coat, and a belt with a holster for their gun. Most of them have a pattern featuring small writing spread all over their hair and facial hair like a newspaper or a book.

It's assumed that one among the undecet is the leader, but nobody knows who it is.[2]

Not much is known about their personality but they have an uncanny ability to act in unison. They also are ruthless murderers, patiently hunting after Gyro and Johnny then during their fight, using their comrades' corpses as shields.

All Eleven Men share the same Stand ability, named Tatoo You! It allows them to use each other's bodies as portals, letting them merge with each other and displace themselves. 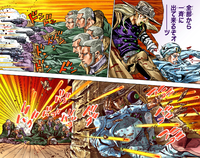 Johnny & Gyro are attacked by the Eleven Men

The Eleven Men are dispatched by Funny Valentine as the Steel Ball Run enters its sixth stage. Johnny Joestar and Gyro Zeppeli detect their presence in the forests near Milwaukee, following their trace. Gyro, listening to their pace, notes that they are unusually synchronized. The Eleven Men continue to trail the duo in Milwaukee until they find the two in a seedy casino in the city.[3]

One of the men approach and Johnny shoots him twice, blowing a hole in his head. However, the rest of the group has suddenly disappeared. Unbeknownst to them, the Eleven Men are using their collective power, Tatoo You!, to merge together and they shoot Gyro in the arm by surprise. Gyro is crippled and can only use one Steel Ball. Johnny shoots again but the men use their dead comrade as a shield. Gyro smashes the face of a second man, forcing him to shoot a third man in the face and kill him thanks to the Spin. All three men are dead and a fourth man peeks from the body to assert the situation. The remaining eight come out together to blast Johnny and Gyro, who are forced to hide behind a column. By using his moving bullet holes, Johnny manages to ambush a fourth man and destroy his head but he runs out of nails.

While Gyro tries to negotiate with the gangsters besides them, the Seven Men drag the corpses of their dead comrades to approach Johnny and Gyro unimpeded. The moment the duo is surrounded, all of them come out. With his remaining nail, Johnny shoots a man in the wrist and forces him to shoot everywhere for an instant. Gyro smashes another's tibia with his Steel Ball, making him miss and merely shoot Gyro's shoulder but the duo is now truly out of weapons. The remaining men align their guns to execute the duo. However, the gangsters in the casino accept Gyro's deal and shoot the men from behind, killing all but one who flees.

The last man acquires the Ears and Right Arm

However, Johnny finds the lone man and makes a deal with him. Johnny gives him the Ears and Right Arm for a half-empty bottle of wine. Crying, Johnny tells him to go away. Suspicious at first, the man accepts the deal and leaves. During the exchange, he witnesses a map on the snow created by the Saint's Corpse and sees the location of the next Corpse Part. The remaining man returns to Valentine with the Corpse Parts and informs him of what he knows.[4]