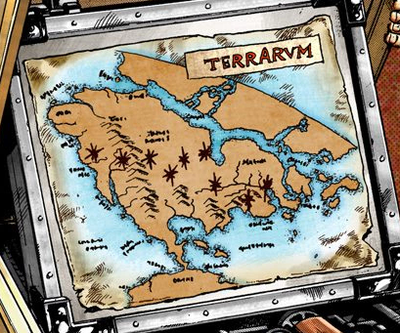 Joseph of Arimathea's Map (アリマタヤのヨセフの地図, Arimataya no Jyosefu no chizu) is an item featured in the seventh part of JoJo's Bizarre Adventure series, Steel Ball Run.

When Jesus resurrected, in drew a map of the America in which were indicated the location of his future Corpse Parts. Joseph of Arimathea witnessed the miracle and drew the map on a parchment.

It was subsequently hidden in an English abbey until it was stolen during the 16th Century. Its whereabouts became unknown, until Funny Valentine found the map in the Parliament in 1889. He then used the map to organize the Steel Ball Run race.

Other languages:
English
Retrieved from "https://jojowiki.com/index.php?title=User:Mayhalke/Sandbox/Joseph_of_Arimathea%27s_Map&oldid=750566"