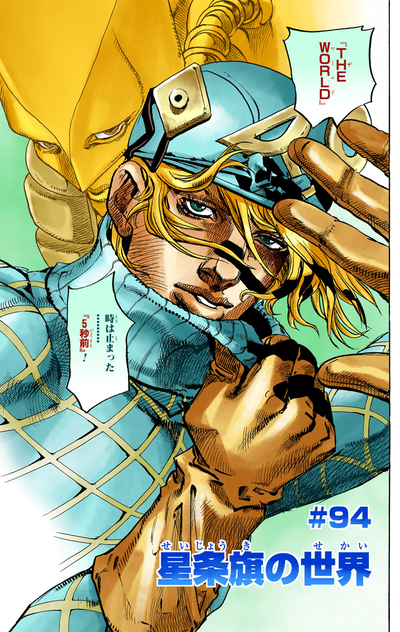 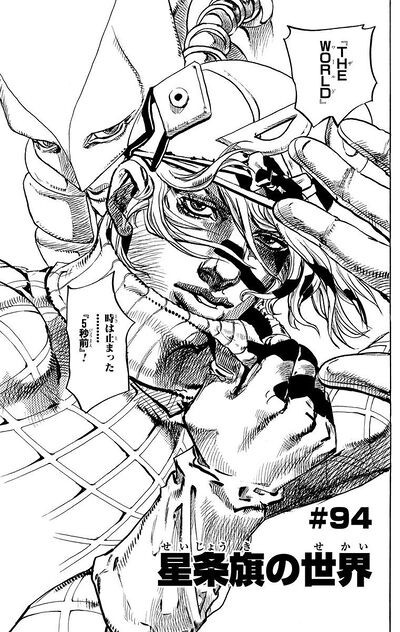 The World of Stars and Stripes (星条旗の世界, Seijōki no Sekai), originally The New World, Part 5 (新たな世界⑤, Arata na Sekai 5) in the UJ release, is the ninety-fourth and penultimate chapter of Steel Ball Run and the eight hundred forty-sixth chapter of the JoJo's Bizarre Adventure manga.

Johnny lies on the ground in tears, in the middle of the Brooklyn Bridge, with a mere 2000 meters or so to the finish line. The finish line of a race that has tested his soul to its limits and beyond. After having made the greatest friend of his life and watching him die, and after approximately 6400 kilometers and 116 days, 6 hours and 12 seconds of racing across the USA, the winner of the Steel Ball Run is Diego Brando with a total of 442 points.

Diego wastes no time in going down to the shelter Valentine had prepared to house and seal the corpse. As he is does so, Diego reflects on more details that were imparted to him by Valentine before his death. Valentine estimates that the shelter he had built can stay secure for roughly 80 years. Evidently, all Diego has to do is seal the corpse away in the shelter, and in doing so, the Trinity Church, where the shelter is embedded, will become the focus of all the luck and prosperity in the entire world.

Author's Note
“
I'd like to express my deepest sympathy to all the victims in the affected areas, including my hometown of Sendai.
”
—Hirohiko Araki
“
地元・仙台をはじめ、全ての被災地の方々に心よりお見舞い申し上げます。
”
—Hirohiko Araki